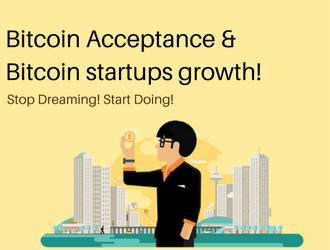 The Revolution of Cryptocurrencies :

Before 8 years there was a great invention happened and people started to call that as bitcoin.It was the beginning of the cryptocurrencies and becomes the end of fiat currencies. But there are a lot of people still don't know what is bitcoin ? & what is the benefit of it? . Eventually, bitcoin started to write its own story in the world economic history & still it creating and breaking the historical records.

If we look back the year 2016, it was one of a successful year in the cryptocurrency marketplace. Bitcoin started with low price value and it gradually increased. Because of the gradual growth, it has broken the previous price records. Yes, bitcoin price hits 1000$ during the start of the year 2017. Simultaneously the bitcoin usage and trading also increased throughout the year.

So now we are going to discuss what will be the future of bitcoin marketplace and how it will cause the growth of bitcoin startups?

The future of bitcoin marketplace:

During the start of the year 2016 the bitcoin price was nearly 500$ and at the end, it has reached 1000$.Some of the geopolitical events also caused the growth of bitcoin usages. Especially in India, The countries demonetization process become the reason behind the growth of bitcoin business. It becomes the reason for a lot of Indian traders to head into the bitcoin marketplace.

In china, people are started to use bitcoin, and trade with bitcoin. Countries like Uganda in east Africa also getting aware of bitcoin marketplace.

During the year there were a number of merchants were started to accept bitcoin in Japan. A local publication in Japan revealed that there were over 4,200 bitcoin-accepting shops during the end of 2016. the annual growth rate is about 4.6x. Rapid increase in bitcoin acceptance directly attributing the Japanese government to accept bitcoin as a money.

In Nigeria over 10,000 merchants are started to accept bitcoin payments. In the second half of 2016 Nigerian currency naira has depreciated at 40% this cause the appetite of bitcoin among Nigerians. Nigeria is going to lead bitcoin adoption in Africa soon!

So we could conclude that lot of organization is aware of bitcoin and started to accept bitcoin as a payment. Sure the upcoming years will increase the growth of bitcoin usage!

This is the right time to start bitcoin exchange business!

We could identify that bitcoin acceptance is trending over the world and this causes the growth of bitcoin usage and cause the demand for bitcoin. So people will search for how to earn their own bitcoin? If this is the case, then bitcoin exchange platform will be the immediate solution for traders. So people will go and fall with popular trending bitcoin exchange platforms.

“If there is a demand, there is an opportunity for business”

Stop Dreaming! Start Doing Bitcoin Busin...
3164
Prev Next
Contact US
Tell Us About Your Project. And We Will Be In Touch !