What is Blockchain Consensus Algorithms

Learn various types of Blockchain consensus algorithms and its uses in blockchain technology. 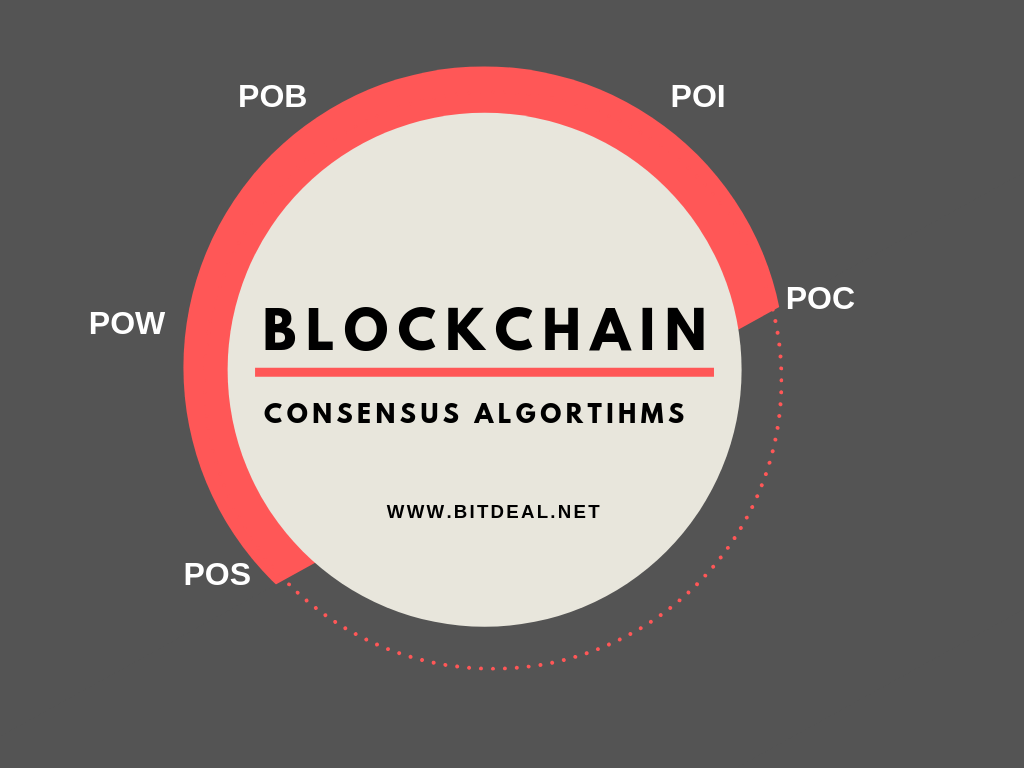 We Bitdeal , Leading Blockchain Development Company can help you in building a blockchain with best Consensus Algorithm that suits for your business services . Our Blokchain experts often undergoes R & D process and always finds the best algorithms out of choices to develop a blockchain .

Here in this article we are gonna look at the concept of Consensus Algorithms which tends to be the soul of blockchain technology . This article cover up the following topics with efficient and clear content for your easy understanding .

Are you ready to explore your knowledge about Consensus Algorithms and its types ? Then without making a delay let us jump into discussion.

What is Consensus Algorithms ?

In the field of computer science , to solve the consensus problems there are several proposed protocols which are termed as consensus algorithms . Consensus Algorithms are mechanisms  used to achieve agreement on a single data value over distributed systems .

We all know , Blockchain is a Distributed Ledger Technology that plays a gigantic role in this digital globe . Blockchain Technology supports for decentralized and it is immutable in nature . At first blockchain is build for the storage of transaction details of bitcoins and cryptocurrencies.

By knowing the benefits of blockchain technology , every industries adopts this technology to make a upliftment and a development in their business . Let us explain some of the important terms related to blockchain in a sentence for your quick review .

Nodes : All connections or devices that are accessible within a blockchain network are termed as nodes.

Minning : The validation process of crypto transactions and adding it in the blockchain network is known as crypto minning .

Blockchain is a way of organizing a database into different blocks that are interconnected . The blockchain technology alone doesnot posssess the distributed nature . It does not provide decentralized environment . It is the Consensus Algorithm that makes blockchain completely decentralized in nature .

"Blockchain is just a framework ;
Consensus Algorithm is the life force of Blockchain "

Consensus Algorithm makes an agreement  with the help of majority votes and this benefits all the individuals in the blockchain network .This is why when there could be contradictory results in a distributed system; use of  consensus algorithms helps for better output .

The main problem with Byzantine is the difficulty to reach on an agreement. If a single fault occurs, all nodes can’t come to an agreement and this results in higher difficulty . Thus Consensus algorithms are being used in blockchain decentralization .

The following are the various consensus algorithms in blockchain technology :

A Proof-of-Work is a measure of  DoS attack and other service abuses which includes spam on a network by requiring some work from the service requester . It most involves a lot of computational power .Proof-of-work- allows,solving of computationally intensive puzzles to validate transactions and create new blocks.

Cryptocurrency that uses PoW : Bitcoin uses PoW consensus algorithms . Ethereum too used PoW for nearly 4-blockchain projects and then moved on to PoS.

Proof of Stake chooses the minners of the next block or individual who validate next transaction by their coin possession . This consensus algorithm introduced for dealing with the difficulties by PoW and aims for distributed consensus .

Delegated Proof of Stake is a variation of the proof of stake.Here, the miners or Validators, are known as delegates. Determination of block production , makes this system transaction within just a second .DPos system was designed to ensure all level of protection against regulatory issues .

LPoS is an enhanced version of Proof-of-Stake Consensus Algorithm . In LPoS, the user have the ability to Lease WAVES from his wallet to different contractors which can pay a percentage for him as a reward. The larger the amount is leased to a full node, the higher the chances of that full node for being selected as a minner to produce the next block.

In simplified Byzantine Fault Tolerance Consensus Algorithm , a block will first gather all the transactions, batch them accordingly into another block and finally validate all of them together.

Delegated Byzantine Fault Tolerance was developed by the NEO team developed with perfect outcome, that all transactions are 100% final after the first confirmation . DBFT is mainly introduced to overcome the Byzantine Generals Problem.

DAG is not a  consensus algorithm but a form of data structure. The blockchains are chain of blocks containing data, DAG is a graph that stores data topologically. DAG could be convenient in handling specific issues such as  data processing, routing, compression , etc .

Proof of activity is an approach that mixes the two commonly used algorithms proof of work (POW) and proof of stake (POS).Proof-of-Activity. It combines the best two features of both algorithms,  more secured against any attack and not a not power-hungry system.

Proof-of-importance is a blockchain consensus algorithm that proves the utility of nodes in a network which allows them to create a block by a process called New Economy Movement (NEM) .

The essential nature of Proof-of-Capacity is the “plotting” feature which will make you devote your computational power and hard drive storage even before you start to mine a block .

The Proof-of-Burn allows minners to sent a few coins to an “Eater Address.The miner who burnt the coins will get a reward and can mine a new block . The coin sent to eater address can not be returned back .

Proof-of-weight is a upgrade of the Proof-of-Stake algorithm . In Proof-of-Stake, the more coins you own, the greater your chances to mine a block , which makes the system a bit biased.Proof-of-Weight tries to solve such biased nature of the PoS using some Weighted Factors .

Get a Free Consultation from Bitdeal's Blockchain Experts Now !!!

1. Consensus Algorithms: The Root Of The Blockchain Technology