Know how blockchain technology can be used in government and public sectors. 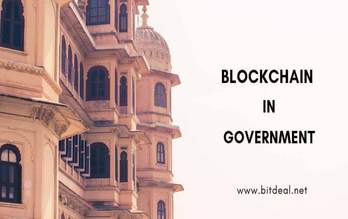 Blockchain is a widespread technology that proves to be the pillar that makes the future digital economy. Blockchain Technology is a potential fuel that drives the government services building most transparent government-citizen relations.

We have already discussed this massive technology, blockchain in our previous article under the title " What is Blockchain Technology" and its use-cases in many major industries such as Banking, Healthcare, Telecom, Insurance, Education and so on.

Here we gonna cover the following concepts related to blockchain in government sectors.

Let us look at some of the challenges that our government sector faces in recent days.

Every information with the government is only low accessible to citizens. Citizens often face trouble in accessing personal informations and are forced to wait for annual tax dollars report. This is because there are no real-time updations of all transactions included in governments.

Sometimes the citizens are unaware of disappearing money. This lack of transparency in government for citizens results in lack of accountability.

The best example of government's slow process that results in damaging the government-citizen relationship is " Filing for benefits ". This may take 3 to 4 months process in US Government. Every Government requires people to prepare personal documentation to submit it to them through mail or online portals which inturns go for several human verifications and auditing processes.

We are unaware of where our money goes and what actually the government is doing with our tax amounts. But the government collects and maintains each and every private information about all the citizens.

Defense departments in all the countries are using existing technology to invade privacy under the name of security. Our mobile phones are the best surveillance tools used by the government to grab our personal information.

The word corruption can be found within all government that involves tax frauds, data theft, falsified identity and lot more. Corruptions can be well notified in developing countries during local elections.

Corruption prevails from the smallest local government offices until the federal presidential elections, which is a worse thing that has to be minimized.

All the government processes involve multiple steps for registering, processing and verifying. This involves a lot of time and a lot more money which seems to be wasteful. As the government becomes bigger and bigger involving more actors, it becomes more difficult to track spending.

Thus if some specific processes in the government were simplified, billions could be saved annually from the citizen's side.

As there is an increasing public demand for transparency, accountability, improved functioning and as well as reduced budgets in every government process, many government sectors are marching towards adopting blockchain technology to fulfill public needs.

Blockchain technology has a lot of scopes to modernize the current government sectors with more transparency and security. Blockchain-based government is an enhanced solution that offers the following:

1. The secured storage medium for both citizen and as well as business data.
2. Less chance for corruptions and thefts.
3. Reduced labor-intensive processes with no excessive costs
4. Increased trust among the public on government and online civil systems.

Benefits of Blockchain in Government

Use cases of Blockchain-based Government

Transformation of cities into smart cities utilizes data and IT to integrate and manage every aspect including business and social infrastructure to streamline all services with the use of all available resources.

The combination of IoT, blockchain technology and cloud computing in government can make it deliver best and innovative solutions to all citizens.

Blockchain-based government helps in validation of educational and professional data and documents in one step easier than normal.

Keeping academic and professional qualification data on an encrypted identity wallet empowers individuals to control access to their data. It also enables schools, universities, and employers to validate “attestations” for courses and work achieved.

We can program smart contracts on blockchain to manage loans and grants to track compliance in terms and conditions. This automated performance tracking ensures real-time data, and increased transparency.

In blockchain-based government, the tax collection process is streamlined by matching tax amounts with income and automatically transfer net salary and tax payments details to the respective recipients.

Tracking and recording data related to vaccinations on a blockchain network can enable the verification of vaccinations faster by all schools, insurance sectors, and healthcare centers.

This automatically makes micropayments and provides access to benefits based on medical status.

Some other use-cases of blockchain-based-government solutions are as follows:

The decentralization in blockchain-based-government has benefits and makes the following departments more efficient.

Future of Government with Blockchain Technology

Thus implementation of blockchain technology can provide immediate solutions for healthcare, trustful tax process, faster and quicker processing of government benefits and allowances for all citizens.

Blockchain-based-government will surely be the best solution for making a transparent and modernized government. Let us hope for the implementation of blockchain in India's government across various departments bringing a great change in India Government.

Get free consultation at bitdeal - A global blockchain developemnt company, to get know about how to integrate blockchian application for government sectors and services.