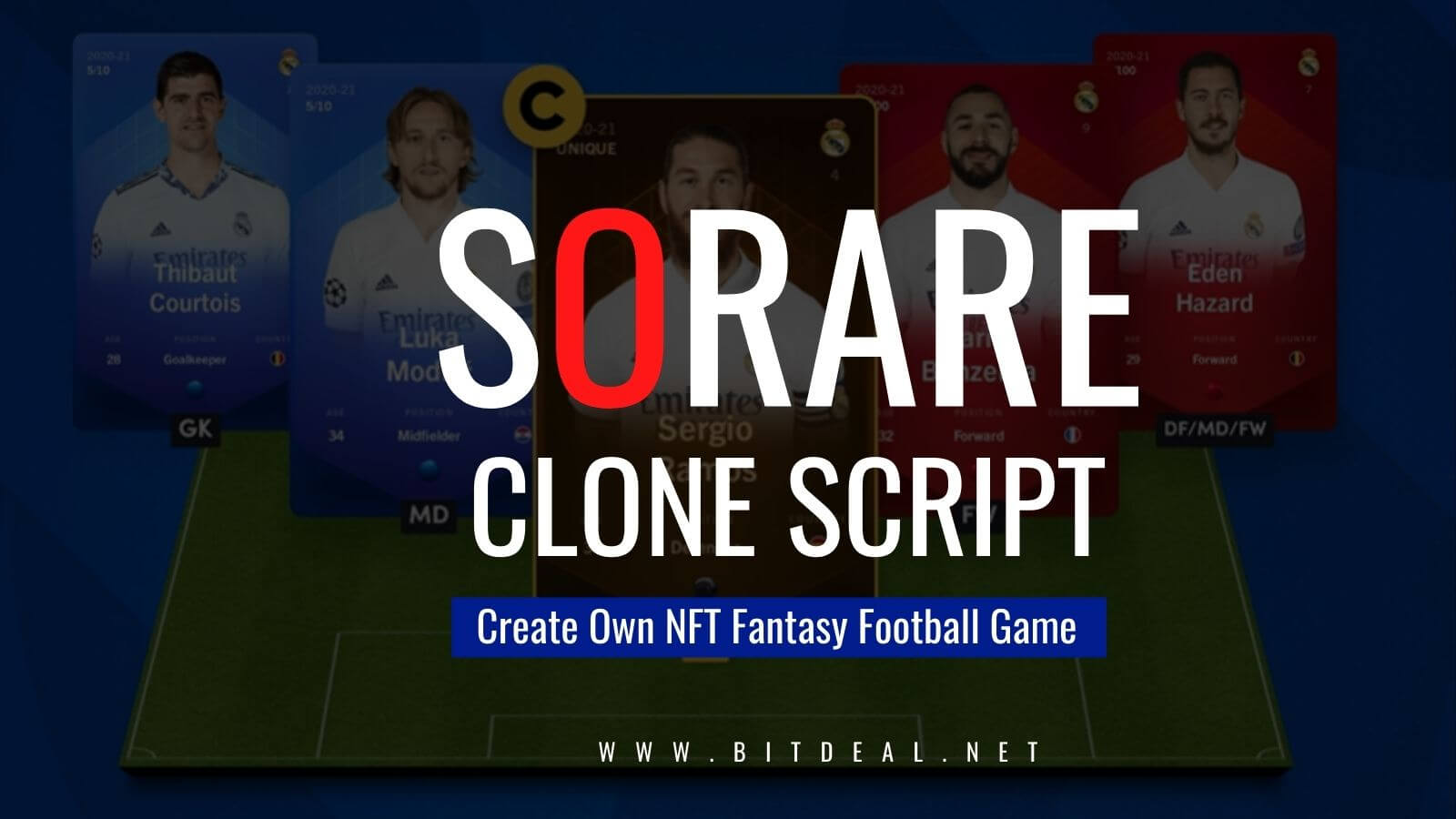 The Gaming Arena provides real-time updates on the performance of the football players, allowing spectators to make informed judgments based on the information provided.

Because the same crypto collectible cannot be used by players on two separate teams, there is no risk of cheating or fraud.

In the information given about points and scores, football fans should expect a high level of openness. There are no operating risks for the participants, which encourages them to participate on a regular basis and builds trust.

Football fans may be confident that their money is safe since they only buy licensed cards from approved and certified clubs using the Sorare clone script.

Other features of the Sorare clone include a bonus point system, customizable teams, eye-catching visuals, and a very user-friendly UI.

Sorare is an Ethereum-based NFT platform with a football theme. Sorare users (dubbed "managers") employ the ERC-721 token standard to buy, sell, and exchange player cards represented as NFTs. Sorare is a fantasy football (soccer) game in which participants may purchase, sell, trade, and manage a virtual team made up of non-fungible tokens representing player cards (NFTs). The lowest Sorare player card now sells for 0.005 ETH, while the most valuable player cards fetch tens of thousands of dollars. It's based on the dependable Ethereum blockchain. The top 135 worldwide football clubs and teams are available for purchase as crypto-collectibles. On the internet platform, it also allows for the exchange of sports cards with other enthusiasts.

Sports enthusiasts may design their own lineups, manage teams, collect points and incentives based on real-life football player performance in matches, and win weekly prizes.

Benefits of starting an NFT Fantasy Football Game like Sorare

How To Start A Fantasy Sports Gaming Platform Like Sorare?

While using the Sorare clone script, you can experience various progress and understand the theme of the gaming platform and with this clone script, Sorare makes revenue by creating new cards on the platform. The new cards can then be purchased and added to the player's collection. They may also manage a team of players and earn points for their achievements in real life.

A card's value might rise or fall over time. That's why gamers frequently purchase and sell cards from other players – third-party websites even exist to assist you to keep track of auctions. More than $150 million worth of cards have been exchanged on the platform. At the moment, Sorare does not take a share from player-to-player transactions.

New users receive 10 free digital sports cards that may be exchanged. The restricted quantity of cards never expires, allowing football fans to participate in a variety of competitions.

The players must collect the most sports cards, frequently win numerous challenges and tournaments, and profit by selling digital trading cards on the transfer market (shifting of players between different teams).

The players will be promoted to the role of New Manager if they perform successfully. The prizes are determined by the players' performance, standings, and cumulative points over time.

Bitdeal is the best NFT Gaming Platform Development company in the trending market, we also offers noble solutions for Metaverse NFT Marketplace Development Services.  when comes to sports gaming development, The value of the worldwide football industry is in the billions of dollars. Millions of dollars are being made by investors right now. Sorare's platform successfully combines the profitable features of crypto-collectibles with fantasy football. As a result, entrepreneurs may use the favorable cryptocurrency market conditions and investor feelings to become the king of the fantasy sports sector by developing a Sorare clone script with assistance from Bitdeal. We are the leading NFT Marketplace clone script development company with a professional developer and enthusiastic team with quality services and on-time delivery with best solutions for entrepreneurs.

Disclaimer: Bitdeal neither represents nor has command over the trademark of "Sorare". We have mentioned the brand name Sorare to make things clear to our clients. It is important to understand that we does not promote, copy and collaborate with them.