Top 10 Metaverse Projects to Watch Out in 2022 and Beyond! 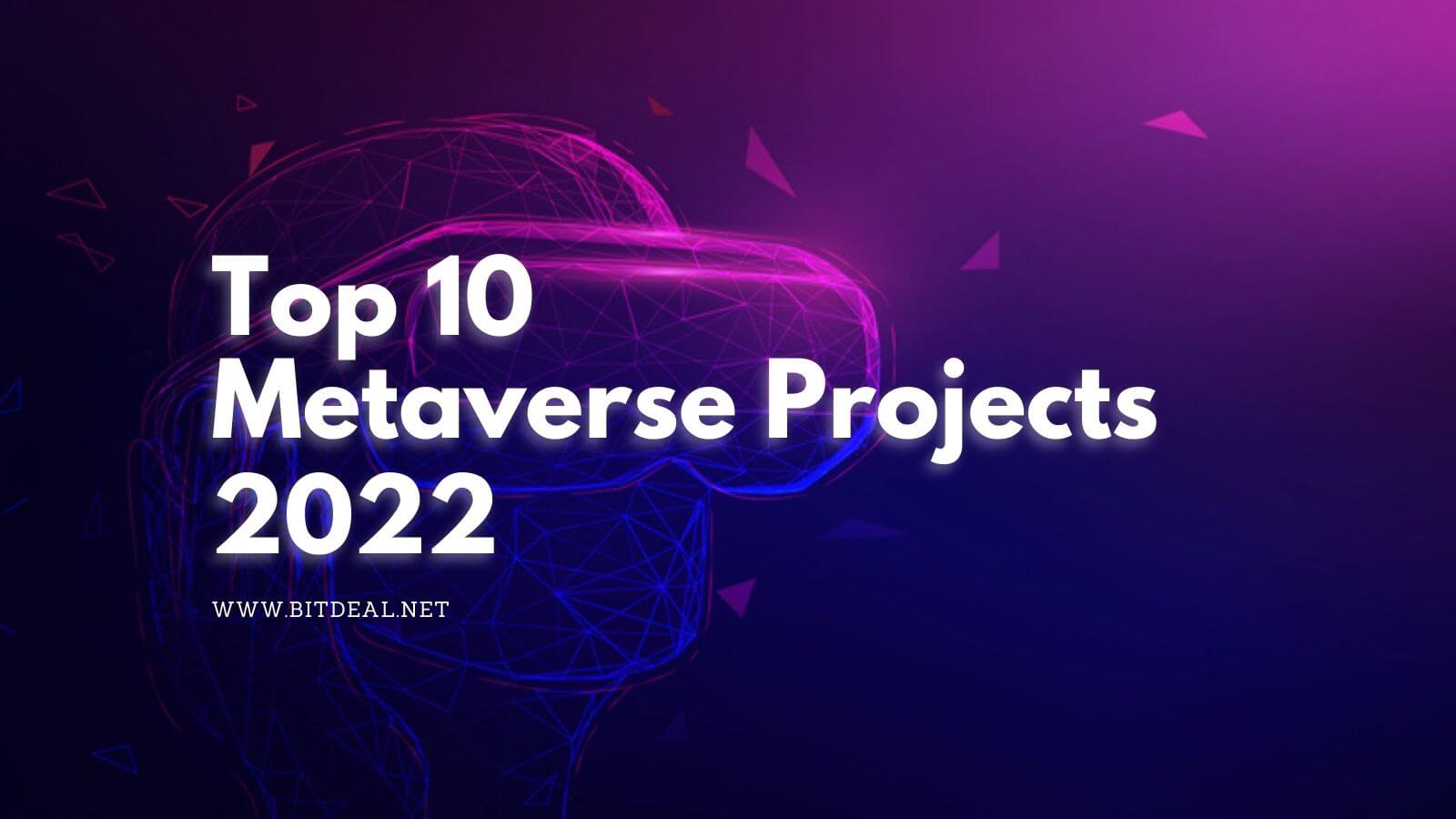 Metaverse is expected to give more to mankind and holds the heavy potential to change the world we are used to. This concept does not seem to have an expiry date . If the technology evolves, the metaverse will also evolve in different asspects. Its market value is expected to reach 1 trillion USD in the future. Many big players of the market had strong hopes for the metaverse and started shifting towards it.

Here, In this Article, Let’s have a Quick look about the Top Metaverse platform for the year 2022. The  metaverse can’t be represented in a single context. Even in its initial stage, the use cases of metaverse are just mind blowing.

Decentraland is estimated as the biggest metaverse platform with the market value of 6 billion USD and with huge users around the globe. Its native token MANA is getting popularity among crypto holders, the price of MANA has doubled in a short duration of time. Decentrland holds another pride that it has emerged as the world's first decentralized virtual world. This platform holds a LAND smart contract that lets users buy/sell virtual worlds. It is called the decentralized autonomous organization (DAO).

The Users of Decentraland can earn more with their LAND by ads and participating in games,etc, Decentraland only accepts MANA token to  buy LAND and all other accessories in the marketplace.

The Sandbox might seem as the second largest Metaverse Platform but the native token of this platform has beat up the MANA token with 1,670 percent in raise. Sandbox is a virtual world that adopts the DAO model.Most of the features and functionalities of Sand box and decentraland seem to be the same but it has two notable differences. The Sandbox has its own currency SAND. The unique Polygon's layer promotes high transaction speed as well as low transaction fee.

In this platform, Players can Create their own avatars and monetize their gaming experiences. Here players are allowed to create virtual assets as Non- Fungible Token and they can display it in a NFT Marketplace to buy/sell it in the future.

Types Of Tokens in Sandbox Ecosystem

Axie Infinity is a popular NFT Gaming platform, still its complete version has not launched but the hype and user count has been increasing on a daily basis. AXS is the native token of Axie Infinity, very recently it has gained about 2,840 percent and tops all other metaverse tokens,. just like The sandbox and Decentraland the Axie Infinity is also built on Ethereum.

It is designed to be the interesting Play to Earn Game where users can participate in battle, buy/sell ingame assets, and breed their avatars. Statistics says that it is the highest revenue generating game built on blockchain.

POLIS is the governance token of this platform. The holders of this token are allowed to participate in decision-making. The distribution of POLIS tokens happened in two stages. In the first stage, it is sold out and in the second stage the tokens are distributed as rewards.

Gala is a blockchain based gaming platform founded in the year 2019 where users can trade the in-game assets in a specific period of time. They come up with the unique approach to give fame to the players which is partially owned by players. This platform has the average users of 1.3 million and it is estimated that nearly 26K NFTs have been sold out. User can participate in the game for free via DApp.

GAlA is the native token of this platform, has its maximum supply of 50 billion and has reached 7.5 billion circulating supply.

Enjin was first launched as the ERC-20 token on Ethereum, later then its protocols are changed to act as a in-game item. ENJ is the native token of this platform which also uses to buy/sell gaming items. It is now functioning as a Marketplace.

The platform has an Enjin Smart Wallet which connects everything together. Enjin Coins benefit nearly 17 billion USD virtual goods.

MetaHero is a kind of brand new platform where metaverse objects are revolve and create prominent 3D avatars of realistic person or objects with 3D Scanning. The Specially designed scanning chamber named Doha scan objects and create avatars in metahero universe. This platform has partnership with wolf studios and crypto HERO and holds the market value of 494 million USD.

Highstreet is such an interesting application which uses its own utility token HIGH. This platform lets you shop things easily inside the virtual universe. Some other shopping stores are merged with the platform. Hybrid model is the unique functionality of this platform. meaning that is the mixed combination of both virtual and physical models. Many top brands utilize this platform to showcase their products. HTC, the tech company, has launched this platform. In the year 2021, this platform has raised about 5 million dollars.

Just shiba inu, Floki Inu is a kind of meme coin but it is built on metaverse specially for the one surfing for undervalued cryptocurrencies. The epic motto of this project is to combine real-world use cases with memes. Floko Inu is expected to launch games, NFT marketplaces in the upcoming years. In y=July 2021, the coin has undergone giant growth of 1331.53 percent.

The EPIK is the initial metaverse project that states that NFT will act as a prominent factor. EPIK is the native token of this platform which is available in popular exchanges like Pancakewap, Huobi, uniswap,etc. The Market cap of this platform is about 62 million USD.

Hope this article educated you with the Top metaverse platforms for 2022. In the future, Many more metaverse platforms will take birth for sure. Being the Metaverse Development Company, we love to share potential information about the industry and we are not promoting the above mentioned platforms.