Top 5 countries where you can start your bitcoin exchange business

If you want to start a bitcoin exchange business, then reading this article will surely hlep you to make a decision about where to start? 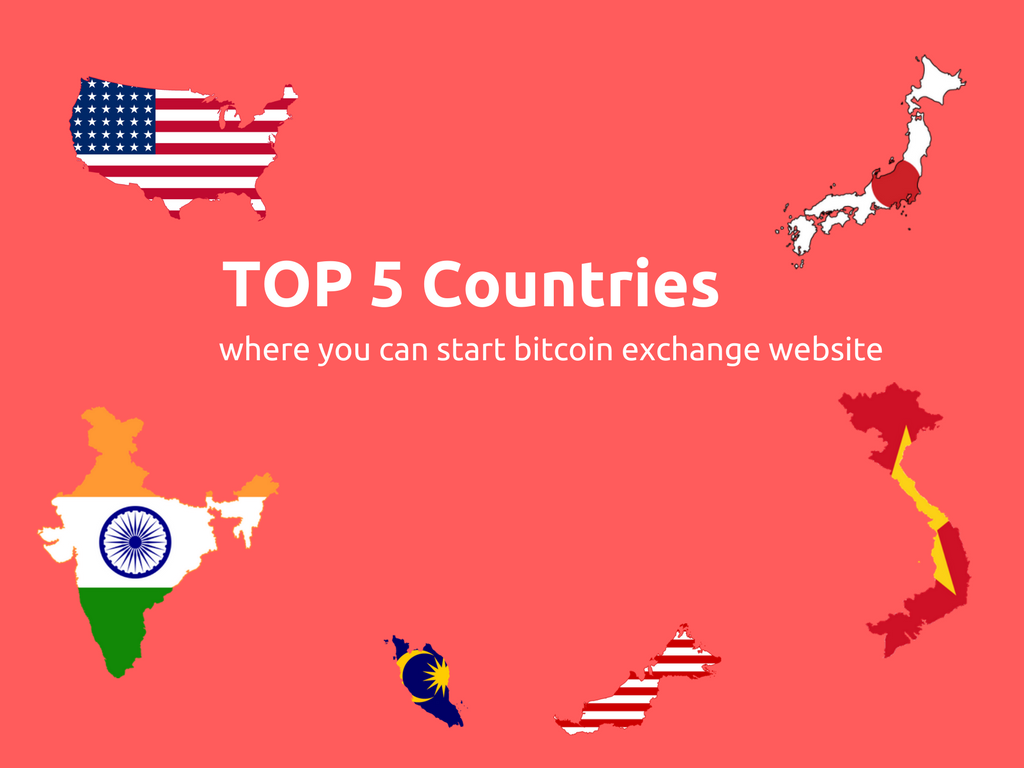 "Customizable trade-matching algorithm, support for several orders like limit order, stop order, and instant order, chart graphics, feasible to adopt with any language, and support to trade for any kind of cryptocurrency pairs." These are the fundamental features of a bitcoin exchange software which comes with inbuilt features.

Why to choose a particular feasible location while starting a bitcoin exchange ?

The modern internet wold gives you full support for developing your own bitcoin exchange business, but it is upon you to decide which is the best place to start. Because .. ....

" You can't sell your business where it doesn't have a demand"

Bitcoin and the related systems are now started to expose globally, so we have to analyze which country or which people are having the high interest on bitcoin network.

Here we are going to discuss the Top 5 countries which embrace the bitcoin exchange business and exchange platforms! According to Google, The below countries alone having the most searches for bitcoin & blockchain related information, So it is clearly shown that these countries are having the high demand for bitcoin & related business.

The circulation of bitcoin got tripled over the year after the government announced about demonetization of fiat currencies. And also the recent Ransome ware attack has damaged millions of computers and organizations in the country and asked the people to pay with bitcoin. Which is the another reason for bitcoin to get popular among India? These two major incidents make the Indian bitcoin exchanges busier than ever.

According to a recent analysis, there are almost nearly 2500 Indians are trading with bitcoins per day. In past, the Indian central bank has refused to accept bitcoin as a payment system and left a statement that RBI is not responsible for people if they lose their bitcoin while trading. but now RBI has mover towards regulating the bitcoins.

So it is clearly shown that the talk about bitcoin is going viral in the countries, Starting a bitcoin exchange in India will get mass hit in India.

After the trumps inauguration of a presidency, United States also witnessed an increasing rate of bitcoin trades.

A single unit of bitcoin is about $4266 as of September 28, 2017. Geral Celente an American trend forecaster said in an interview that bitcoin will not go away soon, People started to realize that the bitcoin is better than fiat currencies.

The another notable thing is the shares of bitcoin has surged to 75% before trump's presidency. The controversy of bitcoin and Donald's presidency makes people make more trade the bitcoin. And most probably the popular bitcoin exchanges are also headquartered in the US only. Obviously, It is the best place for you to launch your bitcoin exchange.

From the beginning of time, the country has provided a full support to the use of cryptocurrencies. In the very recent time, Vietnamese investors are started to import cryptocurrency mining machines as the bitcoin price continues to surge. Also, the Vietnamese government has approved for a legal framework to manage all the cryptocurrencies. This has raised the hope among Vietnam people that the bitcoin could be regulated and accepted as a legal payment in Vietnam. The number of bitcoin miners getting increased after the governments move towards legalizing the bitcoin. So starting a bitcoin exchange could bring you a more revenue without any doubt.

Malaysia is also added to the country who accepts bitcoin as legal. Malaysia's central bank Negara is about to issue.

Two weeks ago the Malaysian Securities Commission left a strong warning about not to invest in cryptocurrencies. But the things got changed now and started to consider cryptocurrencies are the best global payment and investment solutions. The current goal of the country is to come up with a framework which addresses the money laundering and terrorist financing.

Sure, Malaysia will be an interesting region to start cryptocurrency exchange business.

In early, September 2017 China has enforced a nationwide ban on cryptocurrencies and forced the large-scale trading platform to shut down their services. So the majority of traders, entrepreneurs in China has left to the neighbor trading markets, over a night the confirmation of ban resulted in a surge of Japan and South Korea bitcoin exchanges, Japan has overtaken the US and becomes the largest bitcoin exchange market in the world.

According to the current situation, the above countries are having the high demand for bitcoin and other cryptocurrencies. Every country has their own set of rules and regulation while approving a bitcoin exchange so it is necessary for you to make your exchange to comply with those rules and regulations.

Bitdeal is a bitcoin and cryptocurrency exchange solution, which serves for many bitcoin entrepreneurs to set up their own cryptocurrency trading platform among several countries, The software which provided by bitdeal is easily customizable and can be upgradeable related to the technological development of the industry.

The goal of bitdeal is providing the bitcoin exchange software to the bitcoin entrepreneurs. and reducing their struggles while launching their cryptocurrency exchange platform.