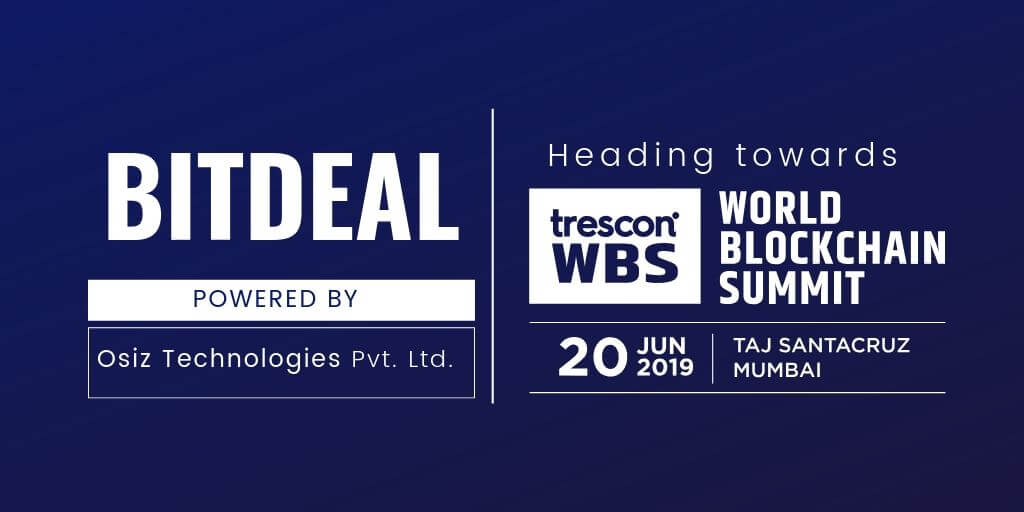 Bitdeal - A Blockchain Development Company powered by osiztechnologies,  proud to announce that we have become one of the Exhibitors at India world blockchain summit 2019, which is going to be held on June 20th at Taj Santacruz, Mumbai, Maharashtra. We have been teamed up with osiz to exhibit our products and blockchain services in front of CEOs, CIOs, CTO, Government Officers from various states and other C- Level Executives.

Let’s have a small outline and interesting deets that could cover up about this enormous blockchain event.

World blockchain summit is a global blockchain series(i.e) blockchain summit or conference that focuses on exploring the blockchain influence, growth and its use cases on both private and public sectors. This event has been staged on grounds from 2017 and every year all around the globe. Just like that this year 2019 is also gonna have this global summit across 5 Asian countries including India, Dubai, Thailand, Singapore, and Hong Kong on different dates.

Trescon Global is the event organizing company, who is going to arrange this biggest conference from the beginning to till the End.

Why World blockchain summit In India is Creating Hype?

This is the First Biggest Ever Blockchain Summit In India. There will be around 300+ C- Level Executives, 30+ Top Speakers, 30+ Exhibitors and 50+ Investors from various states and industries are expected to fulfill this blockchain summit.

According to NASSCOM Report 2019, there have been around 50% of Indian States are already being committed with Blockchain Projects. So, this blockchain summit for businesses and governments could expand the blockchain influence in India’s Digital Growth.

The most notable highlight of this blockchain summit,  it has been endorsed by the Maharashtra government, since it is gonna be conducted at Mumbai.

This blockchain summit is not only for the blockchain people, but also for governments, regional businesses, entrepreneurs, enterprises, It Leaders, software firms, Investors, startups, and blockchain developers who are looking forward to thriving in blockchain space.

The key booster for this blockchain summit is the speakers who committed to exploring their speech. Notably, Maharashtra's joint Secretary Mr. Kaustubh Dhavse (Officer on special duty to the Hon. Chief Minister of Maharashtra) is expected to left his valuable words on this tech stages.

Other Key speakers are :

You can See how the blockchain exhibition will be below…

How Bitdeal Will Take Part In This Blockchain Summit?

We will be one of the 30+ exhibitors by teaming up with osiztechnologies to project our blockchain products and services in front of qualified tech leads around the globe.

Our Team of Experts Who gonna Exhibit Our Blockchain Products