How Blockchain Can Be Used in IOT (Internet Of Things) 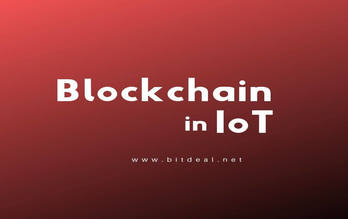 If we can classify blockchain in three different stages.

Then I could say. we, the blockchain enthusiasts are in the growth stage of blockchain and we are about to face a lot of hurdles, flaws, finetunes and failures. But, Finally, this technology will take us somewhere on the top of digital innovations. Blockchain the only promising technology that gonna lead others on the journey of digital transformations. I am damn sure the forthcoming years of blockchain is gonna bring a lot of magic things among all over the globe. So, folks, time to get ready and suit up yourself to experience the rage of blockchain.

Blockchain - The modern ledger technology that creates a huge impact on many industries, business platforms, applications, more and more. Which we know already.  As this technology empowers the industries like banking, SCM, telecom it doesn’t fail to disrupt the technology platforms that act as key elements for the world’s digital transformation. Those platforms are,

IoT - The  Internet of Things Explained

Before we have gone through the highly technical concept of implementing blockchain in IoT, It is a must for us to understand, what is IoT, and why it needs the support of blockchain.

“it is a network of connected devices to share data or information by communicating
with each other through the collection and distribution of data via the internet. “

IoT devices are connected with our day to day routine life, without we notifying and identify it as IoT Device. Like Smartwatches, finger ID, Smartphones, Security Cameras, Debit card readers, and more.

Many countries, organizations, and industries are initiating a lot of projects by focusing the automation interpreted with artificial intelligence. To feed those ideas, and to grow up those ideas for mass implementation. IoT is found to be the most promising technology.

Some of those real-world applications, which are expected to be promised by IoT implementation, are

So likewise there are “N” number of IoT implementations are in the queue. Here is the proof of statement by popular sites.

In IoT technology,  Devices are embedded with sensors that can be controllable by software incorporated with it. This kind of sensor often collects data, and emits them to connected devices, by instructing the working status or current state of the connected system. This is how smartphone, climate detectors, smart TVs, traffic lights are working. The collected information will be stored in centralized cloud storage.

Objects can be made smarter by connecting them digitally to the internet. We can classify IoT devices in three categories

In Manufacturing, if all the machines and other components can be connected with a sensor that could continuously transmit the health and temperature of the machine. This data can be continuously monitored in the devices connected IoT network and will help us to make immediate actions before an issue occur.

In an IoT based farming system, the sensor will collect information on soil state and how much water it should acquire the ability to grow the crops. Then the data will be transmitted to the irrigation system to spray water on the soil.

In General, the IoT system follows centralized storage of data architecture. Every collected information or data is meant to be stored in cloud storage. Then the data can be processed with the use of data analytics. This kind of centralized communication model is similar to the general server/client. As the network of IoT is getting rapid growth with innovative IOT Devices, This kind of centralized data communication model will lack in scalability.

How blockchain can be used in IoT?

Though blockchain is made for transmitting the bitcoin transactions, its main focus is to share data across a closed network. The most notable benefits of blockchain are, any data on blockchain will be tamper-proof, secure, and authentic too. In another side, the success of IoT depends on securing their processed data and keep it confidential.  Industry leaders believed that blockchain is the remedy for making the IoT industry and network more robust.  So, sure, the presence of blockchain can overcome many of the issues and risks faced by IoT industry. 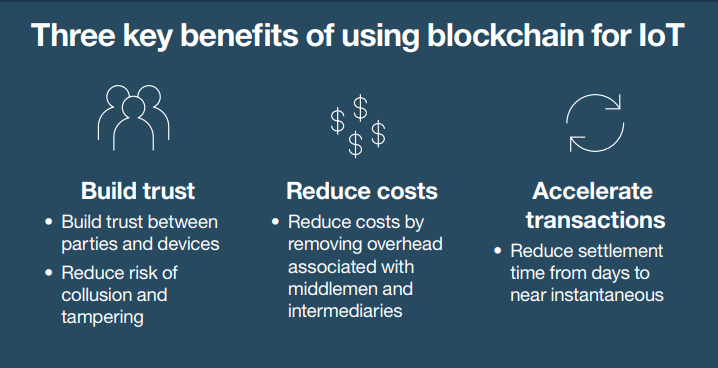 Risks and Challenges in IoT

Every data in current IOT model is passed through the common cloud storage, and this data transmission often needs to happen with the help of the central cloud server. The truth here is, the centralized cloud storage is not that much tamper-proof and secured to store digitally processed data.

As discussed above IOT networks constantly share information back and forth across the internet. Hacking could be easy as it relies on a centralized server, and there may be a chance of occurring DDoS Attacks( Distributed Denial of Service ) Attacks.

Check out 7 most scary IoT hacks and attacks

As we discussed above, IoT networks are dependent on cloud servers, large server farms, and other networking equipment, it will require a high-level infrastructure and also requires maintenance cost. In the future, there will be a lot of IoT devices implementation and there will be a lot of communications could be shared between the nodes. This kind of increasing data on the server could exploit the entire IoT Networks and this will be the major problem in current traditional IOT communication model.

The current IoT Model is not fully supportive to expand the IoT devices connected network. There expected, billions of devices to join  IoT networks in the future. Since the entire current IoT model depends on a centralized cloud server, it will compromise some of the weak points like scalability, security, and maintenance cost.

The centralized cloud data communication model is just similar to a general server/client data model. So, there will be a chance of slow data processing when the server got dumped with huge data.

Blockchain Use Cases in IoT The current IoT Communication model fully relies on centralized data storing. So there will be a lot of chances of a single point of failure may affect the entire network. But with a peer to peer communication model with blockchain we can mitigate those single points of failures. Integrating blockchain and peer to peer data communication with IoT can help us to distribute the data communication and storage across all nodes. Blockchain enables the distributed file sharing, so, every node will have a copy of the data. So, in the blockchain, it is impossible to hack the entire network, even if there is a  point of failure in a single node.

Smart contracts enable all devices to function securely and also autonomously since it creates agreements which are generated only after the completion of some specific requirements.

Decentralization ensures the computation and storage are spread across the millions of connected nodes. So, therefore, there will be no server failure to exist.

Blockchain uses cryptographic algorithms, this ensures the system data, and consumer data to be secured and also confidential too.

Blockchain with IoT can enable cross-chain methodology to secure, and trackable communication between the connected devices.

Hope we had a lot of information regarding blockchain use cases in IoT.  Blockchain could be the best option for IOT Network to keep the data secured, interoperable, immutable and to make them tamper-proof. We at Bitdeal - A Blockchain Devleopment Company having a separate team of blockchain enthusiasts who are passionate about implementing blockchain technology for various industries.  We serve our clients, startups, and industries to move their business into a secured peer to peer networks.

If you would like to be a part of the world's digital transformation then Get connected with bitdeal now!.