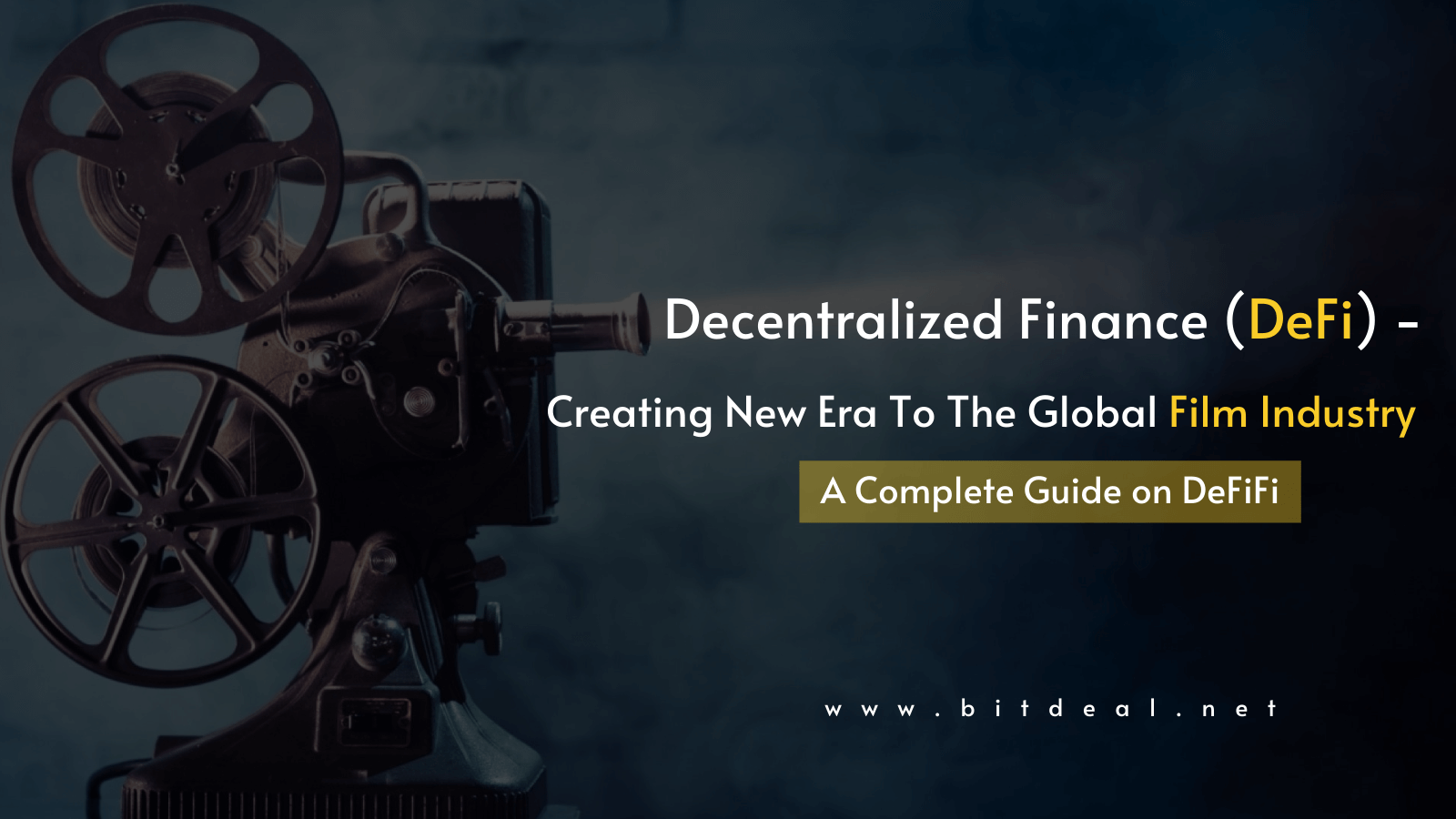 Technology is evolving each day and its impacts on various industries are tremendous. One of the technologies that have been positively influencing every industry is “Blockchain Technology” .India's Media and Entertainment Industry is expected to reach US$ 25.56 billion by 2021-22 with the adoption of digital technologies.

Here let us look at the impact of Blockchain and the concept of Decentralized Finance (DeFi) in reshaping the film industry with high transparency and low issues.

Without any delay, let us dive deep into the concept of Decentralized Film Financing (DeFiFi)

The World's Pandemic Corona Virus began at the end of the year 2019 and has been creating a severe impact on the film industry over the years 2020, 2021.

The United States is being the World's Leading Film Market place and Canada joins in hand too.

Thus one of the major revenue-generating industries listed “Media & Entertainment Industry” on the top as it contributes to a huge share of the Global Revenue each year.

Here is a stats about United States Film Industry Aspects.

Effect of Pandemic on Entertainment Industry

The Media and Entertainment Industry has various segments such as Traditional TV, OTT Videos, Cinemas, Internet Advertising, and more.

The COVID'19 pandemic has a huge impact on the Media and Entertainment Industry.

Even though the downloads and usage of OTT apps and online video/audio streaming platforms increases rapidly in the period of Lockdown and on the other hand the theatres were shut down & the revenue from cinema has been representing -2.4% lower revenue in the year of 2020.

Thus, this World’s Pandemic has greater effects on the Media and Entertainment Industry.

The creators of a film or any series face an issue that takes more time to solve. When any script or ideas of any filmmaker or creator got used up by anyone, the creator must go to court and file a case to get ownership for his script. This is a difficult and time-consuming process and the legalization or ownership or getting copyright

Listed here are the major challenges in the global media and entertainment industry.

Lack of Transparency in Financing

In the film industry, the investors put their money into a project and they do not know the status of funds being used at various steps of film productions. This makes most individuals fear investing in filmmaking.

Drift from Traditional TV to Internet

As smartphone technology is driving the digital world, there has been a shift from cable Television networks, DVDs to the internet. Nowadays the internet streaming business platforms are making huge investments in the production of films, series,etc which results in threat for traditional film makers.

Before the pandemic, the theatres were more adopted by many people to watch movies. UHD Tvs have resolutions of 4K which is high compared with 2K resolution in Movie Theatres.Even though television has a higher frame rate and dynamic range capability than theaters, people prefer premium theatres to watch movies.

The conventional cinema or movies faces huge competition as the internet series are emerging as the people favors. Thus, people love to watch series or movies at home which provides theatrical experience even on the small screen.

Lack of Variety in Genres

People look for original content, when they watch any movie or series. Only those which are unique attracts and reach a huge global audience. Thus, people from various fields should be involved in the process of filmmaking.

Some other bigger issues that film Industry faces are as follows

How Blockchain & DeFi are the Rescuers?

Here comes the blockchain and DeFi that rescue the film industry from its major problems.

As blockchain and DeFi work on decentralized concepts, they both can rescue the film industry which faces lack of transparency in financing over the complete film industry.

Over the years the leakage of films online before its release have been increasing tremendously.Even Though blockchain is not an end-to-end solution for privacy, due to its immutable nature the records can not be modified or deleted .Use of smart contracts and tokens  for signaling content owners,search engines and ISPs and more.

Simplifying the process of Sales and Distribution

As the film industry has global networks of producers, distributors and audiences connecting all those is a tedious process.Thus with blockchain technology, it's easy to connect filmmakers and film distributors and the global audiences into a single network.This will be a scalable and decentralized solution for improving film industry.

Enriching the Copyright and Ownership

When it comes to establishment of copyrights and protection of film content is a very difficult task. Thus with blockchain and DeFi the creators can register their ideas or script on the network and this is immutable. No one has the rights or chance to get the ownership of the already registered scripts.

Equal Opportunities for Everyone

Current Film Industry does not have a space where every player can get the same space to establish their scripts or ideas. But with blockchain , which creates absolute transparency, even small players can get the chance to produce their film and make revenues.As blockchain provides global access, investors from anywhere can purchase,sell or trade their film or script.

With Blockchain and DeFi which are Decentralized in nature, the investors can monitor the complete usage of his funds on various stages of film making and also the profits received over the projects that he has invested.

In many ways DeFi and Blockchain technology can uplift the media and entertainment industry.

DeFiFi is the point where Decentralized Finance and the film industry meets to make an efficient system of entertainment. During COVID'19, $40B locked in the decentralized finance protocols with the explosion of video streaming.

Investors or film producers are the one who puts the money first and see the return in the last.Since, there is no transparency in the process of film production into how funds are being used for the production, how profits are reached, how they are allocated for distribution and more.

The decision of investment is difficult,as the return is based on the success of the film and which is unknown until it is released. Thus, DeFi and blockchain technology can bring solutions for all these problems through the formation of a new realm of Decentralized Film Financing, shortly termed as DeFiFi.

How Film Productions can be carried out using DeFiFi ?

Using the blockchain and decentralization, creators of films can present their film projects on the blockchain community and they can vote on what films receive funding. When the projects win,it would be granted with the financing that it needs from the community managed funds.

The production of film occurs off-chain or offline ,and needs oversight from the DeFiFi community for ensuring the funds are being used properly for film productions.

When the film gets completed, it should be distributed on the platform for built-in audiences who vote for that film.

The final accounting progress will be more transparent and immutable which clears the confusion of profit usability.

In the current film production process, the level of transparency is less in the process of financing, production and distribution. But in the DeFiFi community, the creators have complete access over the financial assets. This visibility of funds usage can increase the volunteers who are willing to invest in the film productions, which drives to a new golden age for the film industry.

The Golden Era of Decentralized Film

Investing in Films made it much easier and more transparent with the help of DeFiFi which makes more financiers participate.

The more the investment available for the film production, the more the films produced and the more the supporting filmmakers with great content ideas and script which attracts more fans and audience across the globe.

Other use case of DeFi and blockchain in the entertainment ecosystem to provide participation of the audience and get rewards.

A complete digital rights management system which allows artists to register their ideas and gets funds for their productions. This decentralized film era can thrive the film industry to the next level with greater transparency.

What are the advantages of the application of DeFi and Blockchain in the Film or Entertainment Industry?

Listed here are the benefits that we can enjoy by the utilization of the concept of distributed blockchain technology and DeFi.

These are the advantages of applying Decentralized Concept in the Film Industry.

Future of Film Industry with DeFi

As of now, there are many decentralized platforms to produce films such as Filmio,Mogul Productions and more which come under DeFiFi platforms trying to provide a decentralized film production space.

Thus with blockchain technology, decentralized finance and smart contracts the film industry can experience the complete transparency and security of data .Thus decentralized films will be the future of the Media and Entertainment Industry which will completely rely on the decentralization concept.

Let us hope for a Sustainable and Bright future for the Film Industry with the adoption of DeFiFi !

Stay Tuned with Bitdeal - Leading DeFi Development Company to get upto date innovations and moves of the crypto industry as a whole.