The Perfect Roadmap To Launch Your Own NFT Game 2023 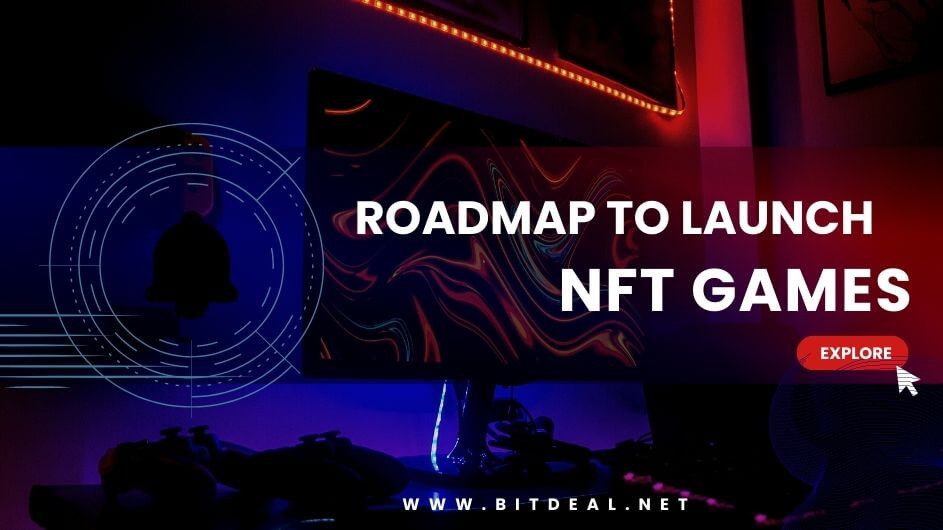 A new era of gaming has begun with the advent of blockchain technology: NFT games. Non-fungible tokens, or NFTs, are distinct digital assets that cannot be replicated or traded. NFTs are used to represent game assets like weapons, skins, and clothes in the world of blockchain gaming.

With an average of 33.8% of the population reporting they have played NFT games, India is ranked first among the 26 countries that have adopted NFT gaming.

There are a few things you should get clear before investing in NFT Games, Which includes, how NFT games are working, Which NFT game type is most promising, what tech stack are needed, how to start creating an NFT game, and what is the best solution to start with it

In this article, let's explore all the necessities you need to know about creating an NFT Gaming,

What is an NFT Game?

NFTs can be used by players of these games to sell the distinctive game characters as well as to receive rewards from the developers. This is how NFT Games significantly contributed to the "pay as you earn" concept in the gaming industry.

How Do NFT Games Work?

The virtual collectibles we can keep in our wallets are nothing like NFT games. They include NFTs in the game's mechanics, rules, and player interactions. For instance, in an NFT game, a special character or avatar could be an NFT, as well as virtual objects like the weapons players use in the game.

Gamers can swap or trade NFTs with other players to generate money. Players now have the opportunity to make money playing NFT games thanks to the new "play-to-earn" model. The NFT game is developed by adding requirements and rules in a smart contract.

An Extensive Step-by-step Guide For Creating an NFT Game

Let's now go over the definition and key selling points of NFT games before giving a thorough step-by-step guide on creating an NFT gaming platform,

You need to first focus on the type of NFT game you want to create. Are you able to create an only puzzle, role-playing, and adventure games, or else will you create strategic games? If you make up your mind on this first, it would help.

Find out what model works best with the type of game you want to create by doing some research. In order to capture the interest of your intended player audience, research a number of similar games and then create something more captivating and original.

You must make space for imaginative game characters and game design as NFT games are known for employing technology to portray artistic and innovative game features and characters for commercial usage. The 2D or 3D graphical artists on the game development and design team must be knowledgeable and skilled.

The proper tech stack and8 experienced developers are the two main factors that determine a platform's success. It is impossible to create an NFT game app in any other way. To create a high-performance NFT game, you must choose the right frontend, backend, wallet, and smart contract technologies.

For NFT game projects, some of the tried-and-true technologies are Unity3D, Laravel, Express js, MySQL, MongoDB, Angular JS, and more. Based on your target platforms, you must also use a variety of operating systems.

For login and authentication purposes, the NFT app project needs to incorporate a cryptocurrency wallet. This will enable you to conveniently and securely store tokens online. With the non-custodial wallet provided by MetaMask, you assume responsibility for your keys rather than a third party. Additionally, it permits browser integration via a plugin.

Step 5: Connecting To a Smart Contract

The front end must take the user address from the wallet and pass it to the Smart Contract in order to give the NFT URL to the users. To establish a connection with Blockchain-based Smart Contracts, use the well-known Web library. Using this module, transactions can also be customized based on users.

Developers with experience should always adhere to well-known languages like Solidify because this aspect of development demands some prior experience and project exposure. They can simply access numerous educational resources on GitHub and other platforms due to such a well-liked option.

Back-end development is crucial as SmartContract would only require the NFT URL in an NFT game app project, After all, the whole NFT with large amounts of metadata will be too large to store in the Blockchain. The backend of the NFT gaming app provides the metadata required to request the Smart Contract in more detail.

Node.js is an excellent choice for the back-end programming language due to its scalability, small size, and expressive code. NodeJS is already regarded as a strong and reliable backend development framework.

You must use the proper tool to test your NFT gaming platform. There are a number of excellent tools available to evaluate the NFT game platform. You can test the app using either manual or automatic methods.

Step 8: Launch The Platform And Expand Your Audience Base

Finally, the platform is ready to be released on the market after being created and tested. Be sure to keep an eye out for and test security flaws before it launches on the market.

What is The Right Solution To Create Your NFT Gaming Platform?

You can do anything now as you know how to make an NFT game! Don't be scared to try new things; there is a lot of room for invention here.

We Bitdeal - A leading NFT Game Development Company really enthusiastic about what the future of NFT games holds. We are excited to watch what new and cutting-edge games are being developed in the upcoming years as we think that this technology has the ability to improve the gaming industry.

What Are The Advantages of Selecting Us Over Others, Then?

If you want to start developing an NFT game, We can help you.

The Perfect Roadmap To Launch Your Own N...
894
Prev Next
Contact US
Let's Talk About Your Next Move.