What is Waves Blockchain ? How It Works?

Here is an article that explains you about Waves blockchain Platform. 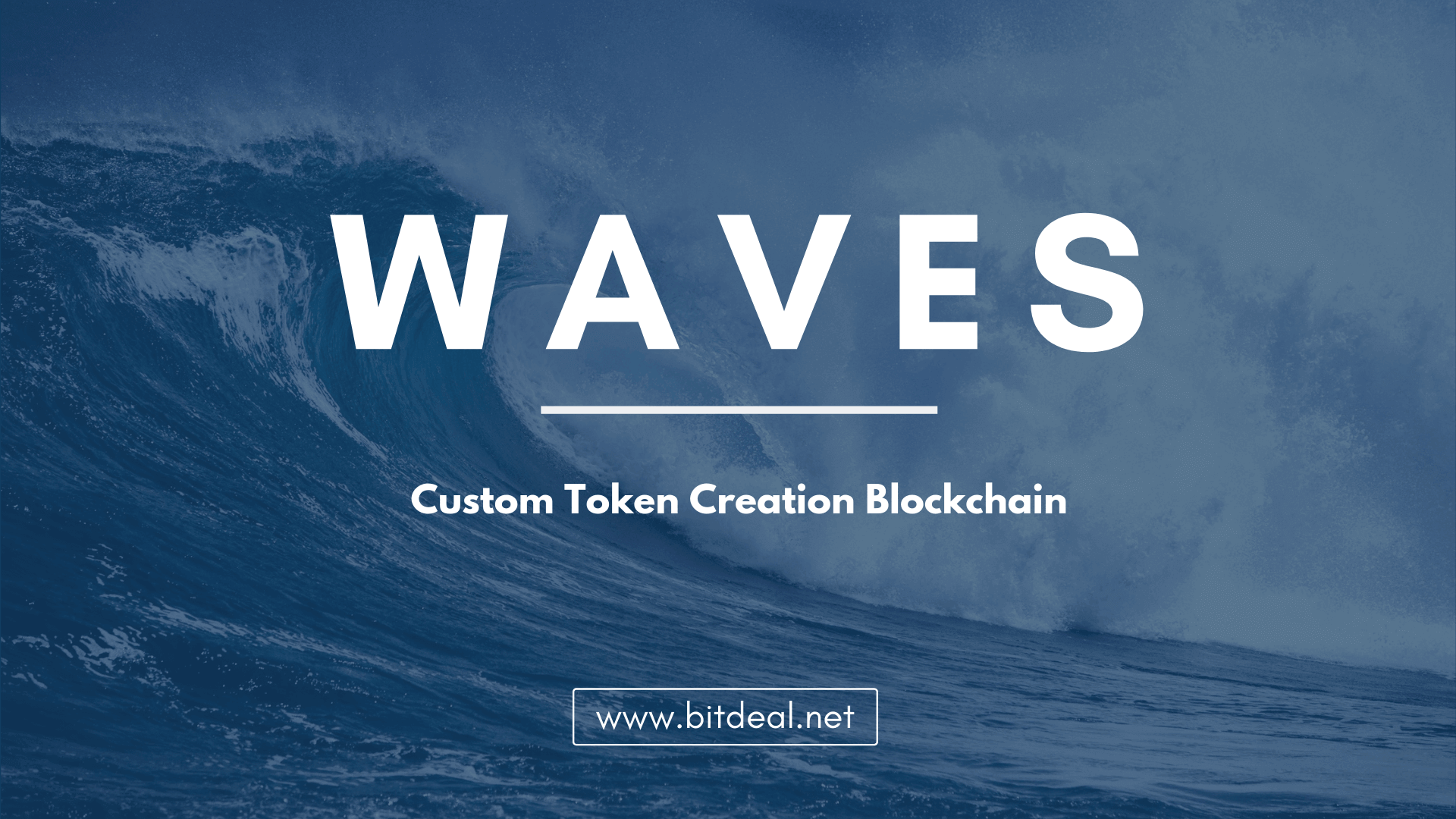 Bitdeal - Leading Blockchain Expert, has extended its research and development in various upcoming blockchain platforms and innovations. We are interested in developing and deploying decentralized applications and smart contracts on various blockchain platforms such as aeternity, TRON, Ethereum, EOS, LISK, Waves and lot more.

In this article, we are gonna discuss one of the important blockchain platforms - "Waves". Come on let us jump into deep discussion.

WAVES is a cryptocurrency, a decentralized exchange platform that allows for the creation of custom tokens and also for exchanges/trading of different cryptocurrencies. Creation of own crypto-tokens and DApps has been possible ever since the launch of Waves.

Wave platform can be a better choice for projects like crowdfunding, building a loyalty rewards program, or creating an in-app currency and so on. Waves support for DEX environment which allows for exchanges of newly created tokens without the involvement of middleman.

The current value of WAVES/unit published by coinmarketcap is $2.39 USD ( While writing this article ) and the market cap is$239,176,190 USD  (i.e) 29,603 BTC.
To know more about  WAVES Price Index, Checkout Here: Cryptocompare Live WAVES Price Streaming.

The most important feature of waves platform is that it allows users to create tokens easily without any programming codings. This created tokens can be distributed and utilized for crowdfunding. Companies can also utilize Tokens to pay for products and services within their applications.

No Limit of Trading

The DEX in waves allows for instant trading/exchanges of all cryptocurrencies and also fiat currency. There are no limits in the transactions and also the trading charges are much lower than centralized exchange like Bittrex and Kraken.

Waves have a bidirectional gateway that offers instant conversion of cryptocurrencies and fiat currencies. In waves, it is easy to add funds and withdraw them to fiat currencies from waves wallet.

Best of Both Worlds

Here is a infographics that lists the difference between Ethereum and Waves. 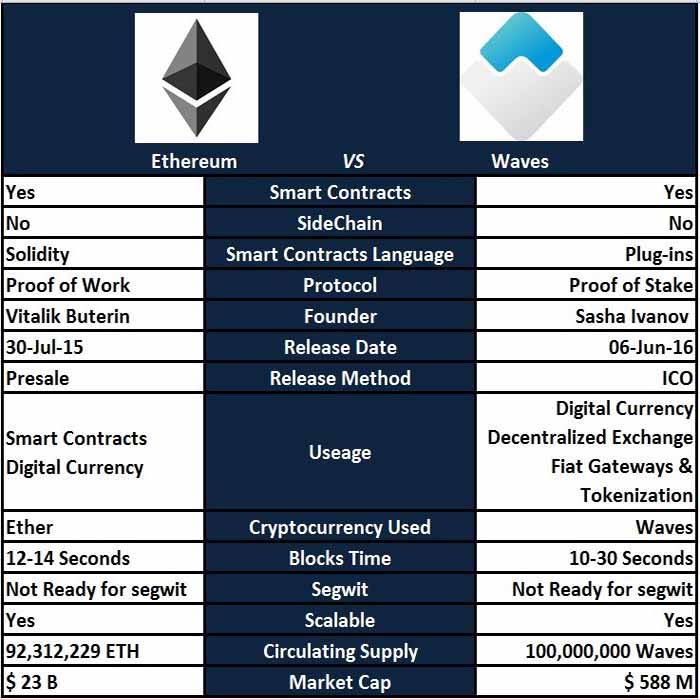 How does Waves Platform Works?

Waves implement new transaction types through plug-ins on top of the core software as an extension. The useful features included in the core Waves software are as follows :

The main aim of Waves platform is creating and transferring of custom tokens. Waves allows for creating tokens through the lite client which is available on the web, also in Android and ios platforms. This created token can be sold, traded, exchanged, transacted and bought without a central authority. This customization of token implies that you can represent whatever you want.

Even though waves does not involve many token functionalities like etherum, it is much easier and requires no coding knowledge to create a token in waves. This makes a way for using waves platform for crowdfunding, ICOs, loyalty programs and a lot more.

The number of custom tokens issued using the Waves platform has grown from 7,000 to almost 20,000 CATs in December 2017.

DEX eliminates many of the risks and issues associated with the centralized exchange. Since in DEX, the funds are stored directly into the wallet, there is no chance for hacking.In addition, decentralization means no administrator to freeze your funds or limit your exchanges/trades. The one who has complete control of your account is only you.

In waves DEX, there is an automated matching system that pairs the buy and sells orders and exchanges the tokens when orders are matched.
Although it requires KYC/AML information to use the fiat gateways, all crypto-to-crypto orders on the DEX are completely anonymous.

Unlike Ethereum smart contracts, Waves do not require Gas for smart contract executions. Instead, they charge a minimal, fiat currency.

Ethereum sounds high on the crowd when its a turn of  ICOs and apps .NEO, EOS, Lisk, and Stratis are in competition for smart contracts developments.
IDEX is one of the top competitors, and protocols like 0x and the Kyber Network make it easy for spinning up a new DEX. Waves compete with other blockchain platforms since it moves higher by doing its best to enrich usability and transaction speed.

Use Cases of Waves

Some of the use cases which are being processed or are already in usage are :

Get more info about Waves Blockchain !!

Waves on recent days focus on increasing the rate of fiat transfer and crowdfunding on blockchain networks. Waves are now hovering in the list of top ten cryptocurrencies by market cap, with still unit price lower than ETH.

Beyond custom token creation, Waves also operates on DEX. Its value depends on its simplicity ie., anyone can create a custom token with a little knowledge of the underlying technologies.

With many more innovations on its way, the future of waves looks Promising.

We, Bitdeal has 150 + Blockchain experts who continuously monitor the growth and innovations in the blockchain world and adopt them for newer changes and developments. We have a separate R and D team of experts who are now working on various blockchain platforms.

Be in touch with our Blockchain Experts to explore more about blockchain innovations.