Web2 Vs Web3: All You Need to Know 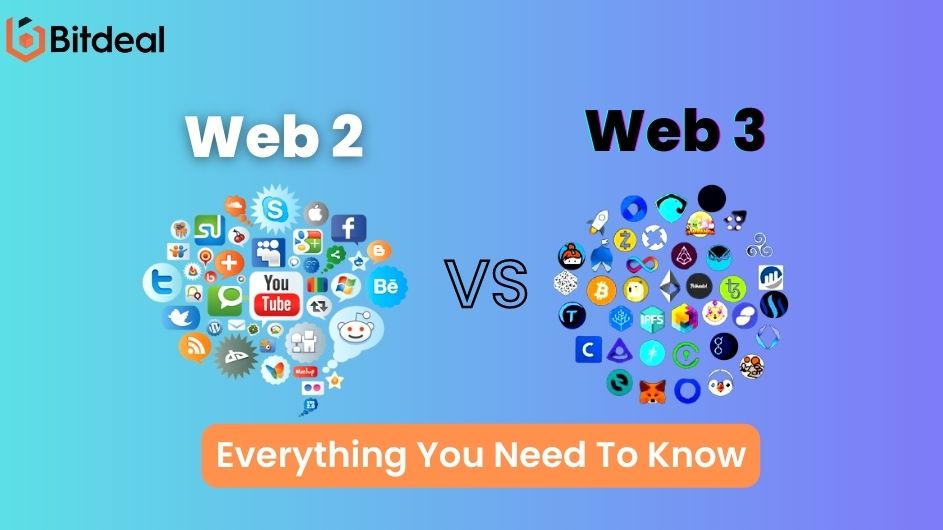 Recently, we have noticed various upgradation of the Web till now.

You may have regularly heard the terms "Web2" and "Web3" in the context of blockchain technology.

Do you understand what web2 and web3 are? Do you know what makes these,  their architecture, differences, and which one gets more attention?

This blog will explain to you the questions mentioned above. Read this blog to know more about it.

Key Differences Between Web2 and Web3

The architecture of Web2 and Web3 Applications

Here, we will discuss Web2 and Web3 architectures. You will be aware of the architecture that the web application has developed throughout time.  Both of these generations are structured effectively to handle the challenges posed by Web 1.0.

There exists a protocol, standards, and technologies that make the development of such apps easy. These architectures define the browser as more efficient. Previously during the Web1.0 apps usage, the pages are viewed using Netscape navigator and internet explorer. But nowadays, we don't identify those, the browsers are clear about adapting to the standards generated at that time.

Now we will see the architecture of both Web2 and Web3,

There were around 100 million web pages and one billion users up until this point. As the ability to write and save information increased, we also realized that the web grew more dynamic. Consequently, we were able to publish content on the internet. A webpage was created for each tweet.

Therefore, we saw a lot more with the second generation of web app architecture.

architecture will be indexed a billion online pages on the world wide web. Additionally, we can catch up with improved interaction. When we save anything on FB, it produces material for the WWW on the internet.

In Web3, data and developed intelligence are closely related. Additionally, it enables robots to comprehend data more. These devices are capable of intelligent data processing, and machine learning is being developed for web apps.

We may start suggesting what content one would need to purchase. As we can see almost 2.5 billion individuals are currently on the internet. Through a web app, a huge population may be caught up.

Features of Web2 and Web3

Finding the better choice among Web2 and Web3 phase

We can observe dynamic content that allows for user interaction due to HTML, CSS, and Javascript technologies on web2.0. These technologies make it easier for developers to make apps that let users engage with the material in real time.

Web 2.0 applications like blogging, social media, bookmarking, and podcasting are fully interaction based. We communicate with one another through comments and texts, and it is simple to attach stuff and share it with others. Some apps like YouTube, Facebook, Google, and Instagram became well-known during the Web 2.0 era. The "Social web" refers to the current web era.

Now let's move on to Web3

Web3 is a semantic web that stated that rather than searching for content based on numbers or keywords, we can utilize AI to know the semantics of content on the web. It could support machines to know and interpret like humans but not like machines.

Users should be able to find, combine, and exchange information owing to the Semantic web. However, the term Web3 has recently become far more popular than the semantic web. The dApps developers use Web3 to explain how to build apps with an open, and decentralized architecture.

We are conscious that AI, blockchains, cryptocurrency, 3D graphics, VR, and AR are cutting-edge technologies and our future. The user experience on the web will be far more immersive due to Web3. The Web is currently in an executable stage where computers will analyze data similarly to how people work to produce personalized content for users.

Although deploying Web3 could seem difficult, the evidence indicates that it is superior to Web 2.0.

Thus, Web 2 is a well-known version of the internet. It is dominated by businesses that provide services in return for personal data. Whereas, Web3 refers to decentralized software that utilizes the blockchain. These apps make it possible for everyone to engage without having their data sold.

We believe that after reading this blog, you have some idea about both. We Bitdeal, an industry-leading Web3 Development Company, offer all-in-one Web3 solutions worldwide. You can contact us for further queries, we are ready to assist you.