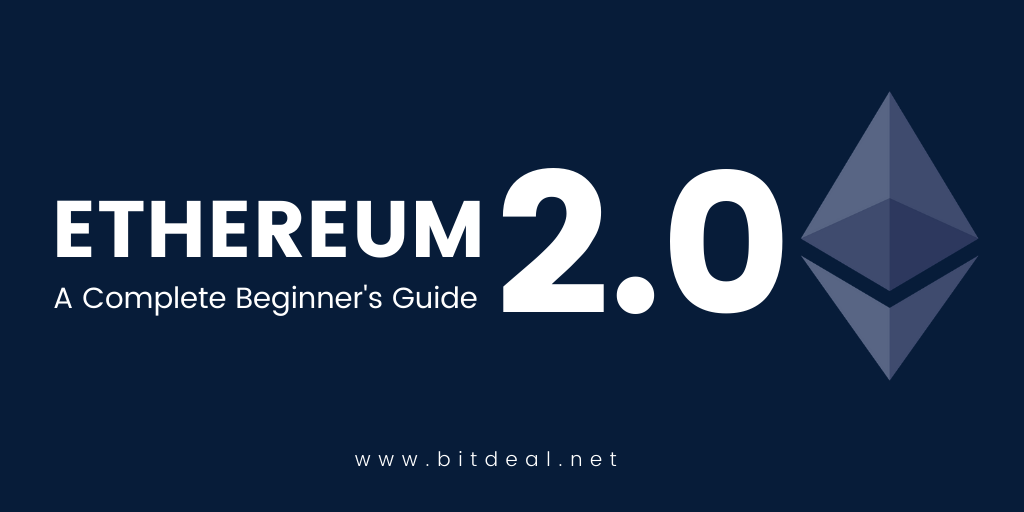 Ethereum 2.0 shortly termed as ETH 2 is the vital upgrade to the current Ethereum public blockchain’s mainnet, focused to accelerate the adoption of Ethereum by elevating its performance.

Ethereum 2.0, the major upgrade of Ethereum will be released in the year 2020 with multiple phases, starting with phase 0.

Are you aware about this upgrade of Ethereum? Have you known about the term ETH 2.0?

If not, nothing to worry about. Swipe below and continue reading, at the end of the article, you will definitely have a better knowledge about Ethereum’s mainnet upgrade ETH 2.0.

Ethereum - A Stroke of Luck in Crypto Globe

Ethereum, the second-largest cryptocurrency and a decentralized open-source blockchain network that possesses smart contract functionalities was initially released in 2015. After the continuous process, the Ethereum community has come up with a new idea called Ethereum 2.0, which is a complete shift of the whole Ethereum mainnet into a new blockchain network with different phases.

Ethereum 2.0 - The Years-Long Upgrade of ETH

Ethereum 2.0 or ETH2 or Ethereum Serenity is the evolution of Ethereum network into the next phase for the performance improvement of Ethereum. The main aspect of this upgrade is the shift of Ethereum’s consensus algorithm from Proof of Work (PoW) to Proof of Stake ( PoS).

This Ethereum 2.0 will result in the improvement of security, usability, and scalability of the Ethereum network as a whole. The upgrade will be live in multiple phases, starting with Phase 0 in this year of 2020.

This launch of ETH 2 is the most significant upgrade compared to the past upgrades as this Ethereum 2.0 implements Proof of stake mechanism, which moves the network from its old or existing Proof of Work consensus algorithm.

Proof of Work ( PoW) is a consensus mechanism in which the miners are rewarded based on the amount of computational energy to solve the mathematical problems to build new blocks.

Thus, in PoW, the probability of the rights to mine a block is the functions of how much hash power ie., computational energy a miner expends.

Many popular blockchains such as Bitcoin, Ethereum 1.0, and more use the Proof of Work consensus algorithm.

Although secured, PoW blockchains suffer from issues like scalability and accessibility.

Proof of Stake (PoS) is a consensus algorithm that selects the miners and rewards them based on the function of an economic stake that a validator holds in the network.

Ethereum 2.0 uses the Proof of Stake to maintain the network which helps in achieving the finality. As this significant change of consensus mechanism reforms the crypto-economic incentive architecture of validating the network.

The upgrade of Ethereum replaces Proof of Work with Proof of Stake consensus mechanism.

One should hold a certain amount of Ether ( ETH ) to participate and make a reward in the blockchain network.

The Ethereum 2.0 staking is the process of locking up some amount of ETH( 32 ETH ) in the wallet to make participation in blockchain mining and get rewarded in return. PoS has several variations in it, which allows people to involve in staking.

Phase 0 is the beginning phase of ETH 2, which will launch only the Beacon chain of the Ethereum 2.0 network, which implements the Proof of Stake by managing the registry list of validators. This phase does not offer for the shared chains or execution, ie., the participants are not allowed to make transactions or call smart contracts on Ethereum 2.0.

For the launch of the genesis block of Beacon chain,the network should be staked with at least  524,288 ETH, which is divided among a minimum of about 16,384 validators. Until the reach of this threshold, the staking rewards will not be distributed among the participants of phase 0.

The original Ethereum PoW blockchain will continue to be in existence, even after the launch of the beacon chain of ETH  and the implementation of PoS. In general, the majority of Ethereum users will not be useful with phase 0, as it restricts the transactions, smart contract execution and dapp hosting. Thus, this phase 0 of Ethereum 2.0 is just considerable testing which does not disrupt the current Ethereum ecosystem.

In Ethereum 2.0, the concept of sharding will result in the partitioning of Ethereum blockchain into 64 separate chains that run parallel to one another, meaning 64 blocks executing at a time.

Right now, the ETH 1.0 chain is capable of processing only one block at a time and if there are back-up transactions, those have to wait until this one block gets processed. With these simultaneous chains, the data burden can be spread across the chains and executed simultaneously.

One of the important parts within phase 1 is the merge of PoW ETH chain with the new PoS chain. This is referred to as Phase 1.5 by the Ethereum Community, in which the PoW chain will be brought to the ETH 2.0 as one of the 64 shared chains in the beacon chain.

It doesn't require any extra work by the ETH holders. Since the history of PoW will exist and it will be operated as PoS on Ethereum 2.0.

Still, there is no clear definition for Phase 2. However, we know that Proof of Stake and Sharding has been implemented in Phase 0 and Phase 1, Phase 2 will be the enabling thing like Ether accounts, transaction and smart contract executions, etc.,.

After the evolution of Phase 2, there will be more opportunities to improve the performance and functions of the Ethereum Blockchain network.

I think we have gained sufficient information about the Ethereum upgrade Ethereum 2.0.

Now, let us look into the impacts of this Ethereum Upgrade on various factors such as Ethereum Users, Dapps, Defi, and also the crypto market as a whole.

Impacts of ETH 2.0 on ETH Users

When it comes to users, we all have a question in our minds regarding the migration of ETH 1.0 to ETH 2.0. ie., What will happen to my ETH?

The Ether Migration is planned through “one-way bridge “ mechanism by the Ethereum Community, in which the users are allowed to lock all their ethers into a contract on the current Ethereum network ( ETH 1.0 ) and get the same amount of ethers on the ETH 2.0 ‘s Beacon chain.

The users can involve in the process of ETH 2.0 Staking, after the credit of ethers ( 32 ETH ) and start earning rewards on ETH 2.0 chain. This is the simple and most secure way to transfer ETH to a new chain, but the non-reversible nature involves the “Lockup Risk “, which means the ETH transferred to a new chain gets locked up for a specific period, resulting in a situation that users would unable to sell those Ethers.

However, the Ethereum community is working to provide a seamless transaction of ethers as much as possible.

The process of mining in ETH 1.0 is being replaced by Staking in ETH 2.0. The validators are rewarded in the PoS chain, as similar to interest that we earned when we deposit money. Thus, Staking being one of the Passive Income Opportunities for individuals in the crypto globe.

As mentioned in the report, the staking participants who used their own nodes can expect a return of 5.8% and those who used third parties can expect 7.5% average rewards for their staking.

The state transition refers to the process of moving the current blockchain data over the new blockchain. At first, it was planned to share a portion of ETH 1.0 to the new chain ETH 2.0. However, the challenges in those are identified and a new proposal is backed by core developers which will be implemented soon.

Apart from the migration issues, the Ethereum 2.0 staking increases scalability which impacts decentralized applications and decentralized finance of the existing ecosystem.

DeFi or Decentralized Finance has a notable place in the Ethereum Ecosystem with 60% of the total value of dapps on the Ethereum blockchain network. As of May 2020, there are over 2.5 million ETH locked in DeFi Dapps and the number will grow as the users prefer DeFi over traditional financial services. However, the scalability remains the issue in DeFi when compared with the traditional system. The existing Ethereum network is limited to less than 50 transactions per second.

Thus, ETH 2.0 upgrade gains scalability with many technological implementations such as sharding, which in turn increases the number of transactions per second on the network. Thus providing a better environment for DeFi Dapps over the traditional finance solutions.

When we examine the Dapp Ecosystem, data shows that Ethereum is the predominant platform for decentralized applications on daily trading volumes. When it comes to Dapps, Ethereum accounts for 71 % market share while EOS accounts for 24%.

Ethereum Community believes that all dapps will be benefited from this Ethereum 2.0 upgrade and the scalability increase will further allow for many new types of dapps on the Ethereum network. The removal of Gas fee in ETH 2.0 could further boost the dapp stability and usability

Impacts of ETH 2.0 on Crypto Markets

With ETH 2.0, the market interest for Ether and Ethereum Options will be growing accountably.  Cryptocurrency options are nothing but a type of derivative that holds the right to buy/sell assets in the future.

I think we have delivered a lot more information about Ethereum 2.0 upgrade. We, Bitdeal - Leading Blockchain Development Company have a keen eye on the crypto globe and analyze new innovations, implementations in blockchain technology, and various blockchain network and make R & D before we implement those innovations in our development process.

Stay Tuned with us to know more about Ethereum 2.0 and its updates in upcoming articles !