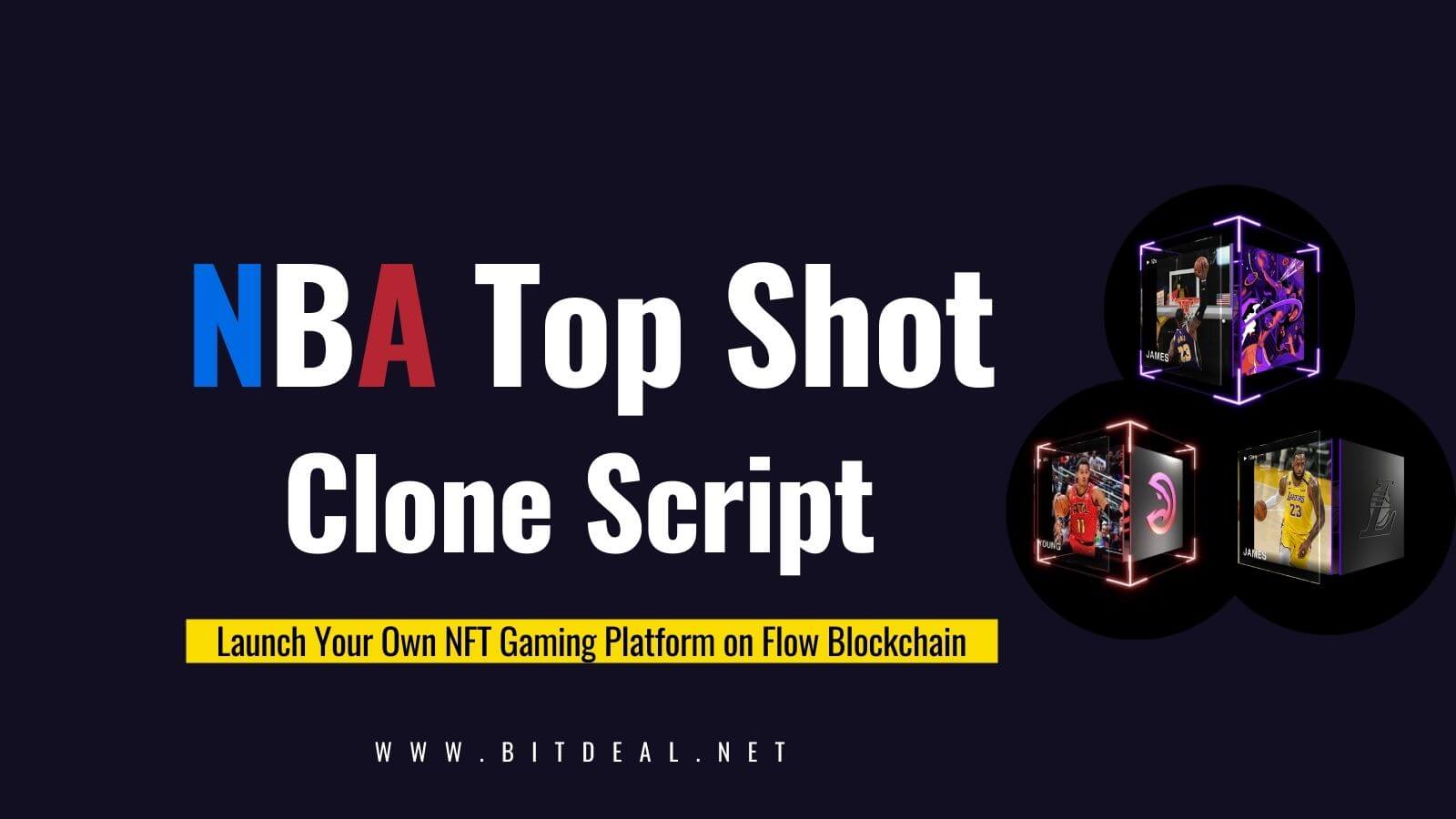 We Bitdeal - NFT Gaming Platform Development Company offers NBA Top Shot Clone Script with inbuilt features and plugins like top NFT game, NBA Top Shot. Our Script is completely customizable through which you can modify or add advanced and updated features in the platform to sustain the players and also their place in the NFT market.

Get the cost of our NBA Top Shot Clone Script from experts now !! Catch our NFT Experts now !!

Listed here are the basic features of our NBA Top Shot Clone Script.

Our NBA Top Shot clone script has N number of digital collectibles that are perfectly authenticated and which are licensed officially.

Our NBA Top Shot clone has stats about the moments and players that are completely trustable and there is no chance of false information being shared on the platform.

There is a gateway through which players can engage with their favorite team or players for enjoying the game.

Our NBA Top Shot clone is customizable so that you can add or delete any assets into the platform for the active participation of players.

We provide a feature in our clone script that continuously watches matches to reflect those into the marketplace with the latest highlighted moments of all matches.

For smooth processing of the platform, each process in the platform with proper standards and guidelines.

Bitdeal - Leading NFT Marketplace Development Company offers NFT Marketplace Script for any verticals like arts, memes, games, and more. We have NFT experts who can develop the NFT Marketplace for games and sports & here are the reasons behind choosing us.

What is the NBA Top Shot?

NBA Top Shot is a digital marketplace where anyone can buy, sell, bid, and trade any digital highlights of their favorite NBA Players.NBA Top Shot is an online blockchain-based platform that allows NBA fans for buying, selling and trading officially licensed video highlights.

NBA Top Shot is a platform that brings the future of sports, trading of card markets along with the cryptocurrency principles, this is virtual cards that contains NBA highlights individually. The moments can include dunks, game-winning shots, and more which are assigned a serial number for differentiating the copies of the same moments.

How Does The NBA Top Shot Platform Work?

NBA cuts the highlights which are then numbered & fixed the selling rate by Dapper Labs. Then, each highlight is placed into digital packs like regular trading cards which are then sold on the NBA Top Shot online Platform. The price may range from $9 to $230 and the price depends on the quality of highlight, the stardom level, and the exclusiveness of the card. After the purchase of a pack, those highlights go into an encrypted, secure highlight wallet to be resold or showcased on the online marketplace, NBA Top Shot.

Some common moments are abundant and cheapest to acquire which involves moments of players like Steph Curry, Doncic and LedBron James, and more. Rare moments are one for which you have to pay high which is the next step up from commons. Legendary Moments are now at the top of the food chain now on NBA Top Shot.

How To Use The NBA Top Shot Platform?

NBA Top Shot is used for buying or selling your favorite NBA Moments. Here are the ways through which you can obtain moments in the NBA Top Shot platform.

How Do I Aquire Moments On The NBA Top Shot?

Here are two ways for purchasing moments on NBA Top Shot. They are

The easiest way to purchase moments currently in NBA Top Shot is on Marketplace. All the moments which are acquired are listed here and these moments will differ in price.
In the marketplace, you can sort by a variety of factors such as players, prices, and more.

Buying packs is difficult and the demand for the packs is significantly more than the supply. These packs are a flipping opportunity for one who looks for making profits. This is the one big difference between buying packs on Top shot and sports cards.

How Do I Start with an NBA Top Shot?

As like a physical card, in NBA Top Shot, the players who have long-term value are the true superstars of the league. Thus, players involved at the moment are the vital factor in its long-term value. Players like Michael Jordan, LeBron, Luka Doncic are being the most desired assets among the people on NBA Top Shot.

Rookie Cards are now dominating physical cards and it became extremely desirable. Thus the first moment that anyone mint on Top Shot is treated as a rookie card. Thus, moments obviously matter in the NBA Top Shot platform.

The serial number is like the birth date of a particular card and the moments with the lowest serial number are desirable for the reason that serial no 1 possesses the most significance. The moment serial number that matches with the player's jersey adds more value.

The common moments are the easiest entry point into the NBA Top Shot. But there is not a ton of long-term sustainability with those assets.

How To Create A Sports NFT Marketplace Like NBA Top Shot?

As NBA Top Shot-like NFT based games are becoming more popular, creating your own NFT Marketplace like NBA Top Shot will be more beneficial in this modern crypto-based NFT space.

How can I create my own NFT Marketplace like NBA Top Shot? Don’t worry. You are at the right spot.

Some of the highlighted advantages of starting an NFT Game like NBA Top Shot.

1. Great Return on Investment
2. No or Low Capital Investment
3. Fast reach in the market
4. Most popular and accepted business idea
5. Quick user base gaining and more.

Ready to create your own NFT based Digital Card like NBA Top Shot?

Get NBA Top Shot Clone Script from Bitdeal and launch your own NFT Gaming Platform!

Disclaimer: Bitdeal neither represents nor has command over the trademark of "NBA Top Shot". We have mentioned the brand name NBA Top Shot to make things clear to our clients. It is important to understand that we does not promote, copy and collaborate with them.

NBA Top Shot Clone Script To Create Digi...
4405
Prev Next
Contact US
Let's Talk About Your Next Move.