Create Your Own NFT Marketplace on Avalanche Blockchain 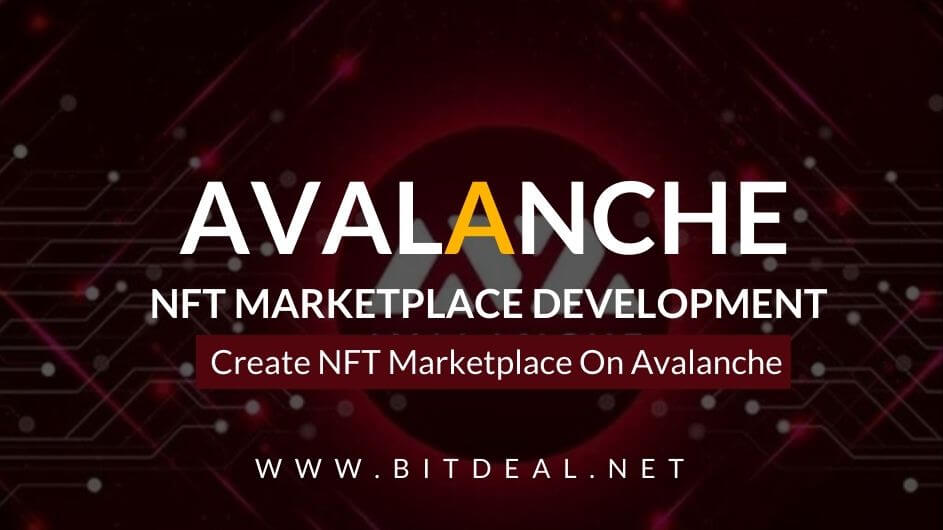 What is Avalanche And How it is Beneficial?

Avalanche is a smart contract-based blockchain network that is open source. It was originally intended to be developed as a protocol to overcome the issue of validations from untrustworthy elements which had previously afflicted the blockchain world.

The benefits are as follows,

Avalanche is one of the greatest in the entire blockchain universe because the chain supports it with extensive features and methods. It is evident from the preceding points that an NFT marketplace

Let us see how to develop an NFT marketplace on Avalanche ?

How to develop an NFT marketplace on Avalanche?

NFT marketplace development on Avalanche is still a notion in its infancy because the blockchain industry has been hit by significant swings linked with cryptocurrencies since 2020.
Nonetheless, a few marketplaces like Venly, NFT stars, and GhosMarket have expanded their operational area to include the blockchain because it has unique features and uses fast transaction processing procedures.

The process of launching an NFT marketplace on Avalanche is comparable to that of any other blockchain. All relevant procedures must be taken from deciding on a specialty for building your portal on the blockchain while considering the crucial changes of Avalanche.

There are many NFT marketplace developed on Avalanche during 2021, and it was a terrific year for avalanche and the NFT scene in general. The Avalanche NFT community keeps us interested and excited during pandemic times.

The top 5 platforms to buy and sell Avalanche NFTs are as follows,

NFT trade-The first decentralized cross-chain NFT platform, marketplace, and aggregator, enabling users to fully utilize the NFT ecosystem. They have been the highest vote in our latest community pool, and they will be the topics for 2021.

Kalao- The future of NFT marketplaces is to take NFTs out of wallets and show them in the "metaverse" using virtual reality. They provide some unique viewing opportunities as well as special community activities.

YetiSwap- Avalanche and Ethereum assets are traded on this well-structured DEX which focuses on quick payments and cheap transaction costs. YetiSwap has also created an NFT marketplace that is gradually gaining popularity among avalanche users.

NFT key -A multichain for finding, collecting, and trading NFTs. there are currently no listing costs, and the site hosts a wide range of participating enterprises.

Snowflake- This was the first worldwide marketplace to launch. They have a diverse collection including some true jewels.

In February 2022, the avalanche will become the metaverse crypto token to generate revenue.
Avalanche is one of the large cryptos to witness a price increase with Ethereum down 1-2 % and Cardano and Solana down a whopping 10%. However, the value of metaverse tokens is upgrading. Over the last few days, tokens such as MANA and AXS have risen in value, while the ever-grow coin has revealed amazing new advancements that will make crypto and metaverse much more accessible available in 2022.

Why choose Bitdeal for NFT marketplace development on Avalanche?

While the Avalanche NFT ecosystem is not as large as Ethereum and Solana's suitable solutions are gradually appearing. When DeFi first took center stage, Ethereum went through a similar metamorphosis, only to be dethroned by the attention-grabbing and considerably more popular NFT culture.

We Bitdeal is a leading NFT marketplace development company who offers NFT Marketplace Development on various blockchain such as Avalanche, Solana, Cardano and  more. We strongly suggest you concentrate your efforts on the proven NFT market around ethereum, if your primary goal is to contribute to the growth of the AVAX ecosystem. We hope that the many avalanche NFT marketplaces we have mentioned above will assist you in getting started.

Get A Free Quote To Build Avalanche NFT Marketplace !