What are Dapps ? How Dapps Works ?

Explore What are dapps, and the future of Dapps 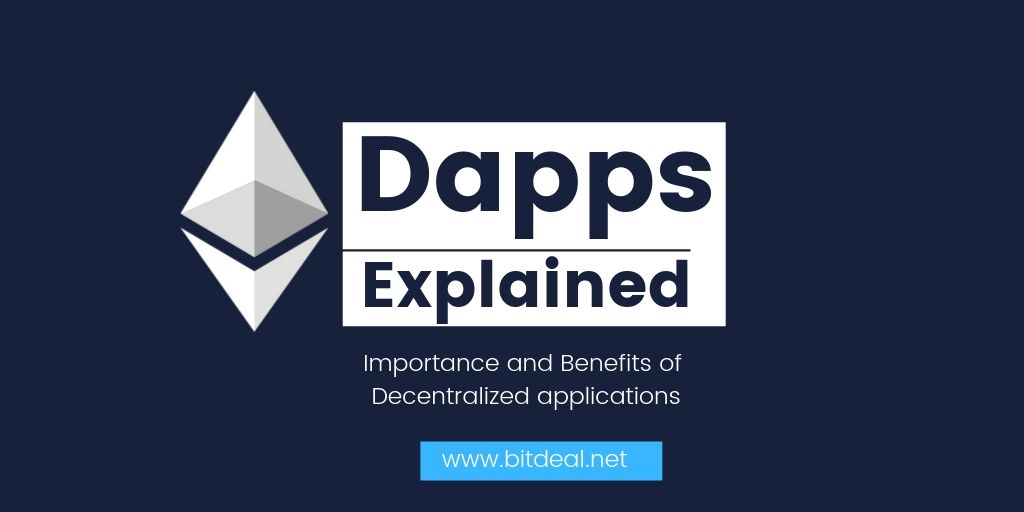 Great Warm greetings to you, the Future Entrepreneur of Crypto World. Nice to hear, isn’t it?

Yes, Nowadays DApps are being the point of discussion to the Blockchain town and the developers worldwide. Fine, then what is DApp, why it is being So interesting topic to talk about? Come on, let us get into the discussion.

Does this Sound Confusing? Wait, As the name Decentralized Application suggests it is an application that doesn’t have any central authority to monitor or process the workflow is called DApps. Here the authorization has been distributed into several nodes (users).

For instance, you are in a state to transfer a pen to your neighbor. There are two cases,

1. You just take the pen from your box and giving it to your next person - Decentralized Application

2. Here you are waiting for someone's permission to take out a pen from the box and after the approval you giving it to your next person - Centralized Application.

Am I Making Any Sense?

DApp doesn’t require any middle man for connecting users and developers. They are connected directly to manage and host the code & user data.

What are Centralized Applications?

Centralized Application structures depend on single top management to make decisions and provide direction for the Organization process.

What are Decentralized Applications?

Decentralized Application Structure depends on a team environment at various levels in the business. Individuals at each level in the business may have some autonomy to make business decisions(I.e from higher level to lower level )

Centralized Applications or Traditional Application uses two important elements called front end and Back end. Here a single server will contain all the logic to conduct the further necessary steps. The Server will receive your request, process it, saves what it needs, and returns the correct response.

With Decentralized Applications, all nodes in a network receive the logic that is stored within your contract. Once the contract is mined, then all the nodes in the network will receive the same logic and it will be saved on the Blockchain. When you interact with the contract, the same signal must be processed with the stored logic

In Traditional Centralized web Applications, there will be a centralized server for hosting. This makes quite easier for the attackers to interrupt the hosting servers. Hackers can easily do alterations in the stored data.

But, in the case of DApp, it works on the decentralized server model. Hence it requires the participation of every element on the network for modifying or taking control of any information. >>Check out more here

DApps run on a blockchain – one of the most well-known blockchains is the Ethereum network. Today there are over 1000 dApps built on Ethereum.

Ethereum was the first Independent Blockchain platform and quickly became adopted as the platform of choice for dApp development. Out of 100 dApps top 91 is built on Ethereum.

How Does Dapp Work:

DApp, As its name, suggests it no need to be noticeable as an application. It can be web pages, desktop or mobile apps that simply operate like any other application might. All the data of a particular application is not stored in a local or cloud server rather than in Blockchain.

Blockchain is nothing but a collective of nodes that maintains a distributed open ledger. In detail, Blockchain is a peer-to-peer network its purpose is to maintain the data that is stored in an open ledger. Each node on the network has the copies of the ledger that is N number of copies will be there in the ledger.

Hence, it is impossible to change the data on the ledger. As a result, it is highly difficult for hackers to hack or to manipulate the data. Usually, miners will verify the transaction and store them in a network. To do this process it requires a lot of computing power, so for the effort of miners, they will be paid in tokens by the user who initiated the transaction.

Thus, Dapps necessitates users to have a wallet, which holds the token of corresponding Blockchain. For instance, DApps running on the Ethereum network will commonly use Ether tokens.

Open Source in the sense, it can operate autonomously and maintains the tokens without anyone intervention. The application can modify its protocol, but the changes must be decided by the consensus of its users.

To Avoid a central point of failure, the data and records of application are stored cryptographically in a public, decentralized Blockchain. Cryptography involves the process of securing the information that cannot be read without a key to decrypt it

As the data are recorded in a peer to peer Decentralized network, it strongly supports security. Hence, DApps by its nature has the ability to safeguard against any malicious and fraudulent activities.

Miners are rewarded with a token for their effort during the mining process. Most of the dApps that use cryptocurrencies create an internal token unique to the platform; these are often based on Ethereum and integrated with its blockchain since that currency's ERC-20 standard makes it very simple to create a unique token.

Check out more about the Benefits of DApp!

Nowadays everything is DApp. Blockchain-based services in Identity authentication, Finances & banking, Voting, Governance, Logistics & Supply Management are at the top of the DApp list now.

In the next five years, we will see tremendous changes. Here’s a little bit of reality check.

“ In the first quarter of 2019, a total of 504 dapps were added. with Ethereum-based dapps dominated and accounted for more than half of the newly listed dapps.” This simply shows that still, ethereum stays as a top choice for developers to build their dapps.

At the same time, there comes a trend called multi-chain developing, whereas many Ethereum dapps expand on multiple chains, like Ethereum + EOS or Ethereum + Tron.

And dapp.com stated that,

- More than 80% of dapps that were built on the Steem and TRON are had, active users.

Blockchain That Is Suitable For Dapp Development

TRON is nothing but a blockchain like EOS, Ethereum, and Bitshares. Just like every other decentralized blockchain network, TRON is also having some specific protocols, own blockchain explorer, own cryptocurrency and have been introduced with a specific intention. TRON Dapp Development is the process of developing dapps by leveraging the TRON Blockchain Explorer.

Source : What Is Waves Blockchain ? How It Works?

Source : What Is Aeternity Blockchain?

MINTER is a Blockchain Network where the users can create their own coins and can exchange them for other cryptocurrencies and fiat currencies like the USD.

TEZOS is a blockchain network similar to Ethereum for developing and deploying smart contracts and decentralized applications. Tezos is the first self-evolving blockchain in the globe.

Source : What Is Tezos Blockchain ? How It Works ?

The Advancement of blockchain is unavoidable. We at Bitdeal providing you a high-end Dapp Development Services . Having a separate team of A+ expertise Blockchain developers who have exposure in developing and deploying, custom, offshore, private, public Blockchain and Ethereum dapp development.