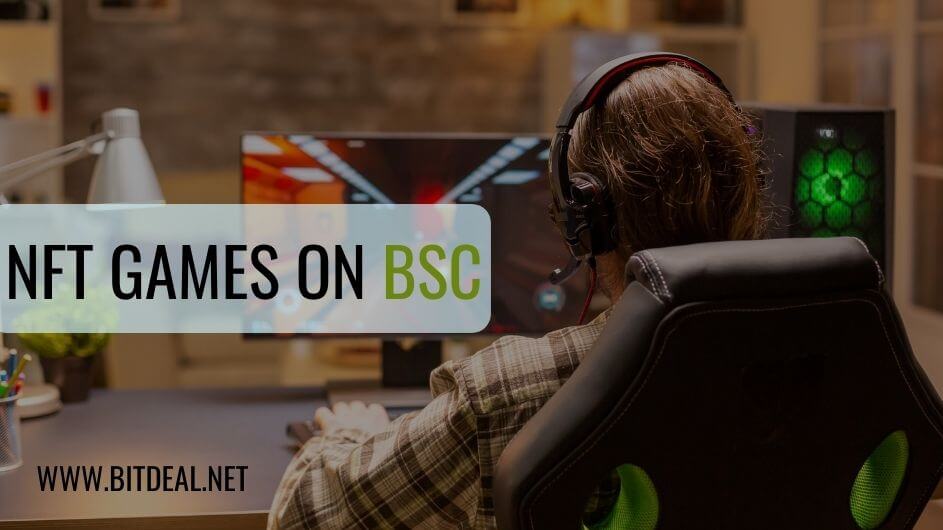 Playing online games are becoming popular in recent days. In those decentralized blockchains, games are most played and the games on Binance Smart Chain (BSC) are so great that not only have fun but also make you earn simultaneously.

Here in this article, let us look at the top NFT based Games on BSC that are played most and are popular among the players.

Listed here are the top NFT Games that are built on the Binance Smart Chain (BSC) network.

RobotWars is a defense strategy game built on the Binance Smart Chain network where users can get their own robots via opening Rubics.

With this robot, users can use WARFARE with which they can fight the destroyers and earn $WAR tokens for humanity's defense. There is a marketplace inside the game through which players can purchase upgrades, weapons, and robot swaps.

Play-to-Earn is the method employed in RobotWars for generating WAR and also uses future features for boosting the values of NFTs. Users can exchange those NFTs for WAR tokens & also trade them on any exchanges or convert them into fiat currency.

The 3D virtual space of SecondLive is a game where players can become virtual avatars and do all the things that they do in real life. Players can do shopping, dancing, singing, business handling, and virtual exhibitions.

The game avatar can be used to create content and earn profit. SecondLive involves four main modules and players can use avatar editors for designing their characters & setting them in the metaverse.

It has multiple virtual spaces which can be transferred as areas like games, the lobby, workshop, shopping center, and concerts

The first game launched was Dream Card which was inspired by Pokemon & which has collectibles built on BSC & Ethereum.

Binemon is a metaverse that is backed with blockchain & NFTs where users can have fun collecting & enjoying digital monsters during battle royales. As usual collectible card games are built on Ethereum blockchain and Binemon is built on Binance Smart Chain(BSC).

My DeFi Pet is a virtual pet game that combines your personalities, collectibles, and DeFi & this game operates on a supported network that involves KardiaChain & BSC.

This has the main in-game currency called DPET Token used for improving, exchanging, and trading. In this game, the pets possess unique qualities in the initial phase.

Block Creatures is a play to earn  NFT Game that @wizard_devv built on Binance Smart Chain & the game aims in collecting creatures & training them so players can earn in-game reward tokens called $MOOLAH.

Each and every character & item in this game can be tradable ERC 721 tokens on BSC.

DungeonSwap is a first-ever BSC DeFi RPG game and earns DND tokens by staking and becoming ready for adventure in the dungeon. The platform has a functional staking pool & DeFi yield farm through which gamers can earn DND tokens.

When it comes to the development of table RPG-style web games using NFTs and making fun more at the same time.

Apart from participation in LP mining & buying cards, it also provides you with added interest in the spin-off platform of the NFT Gods app.

Profit Circus S3 BSC is a game where players can put their pCWS at stake through which they can earn crowns. when they play for the first time, the players will get rewarded with free NFT that they can stake for crowns in the Seascape.

This game involves one of three of Seascape's DeFi mini-games which goes along with NFT Brawl & staking soon.

The $AOW token is the bridge to the world of Lunar Land. Players can build kingdoms with the help of different tokens.

The game involves forming trade roads, building new castles which include both allies & enemies. The players have the right to choose the character they want to get the title for entering Lunar Land's world.

Some other NFT Games on the BSC network involves,

How Can You Launch Your Own Gaming Platform on BSC?

With the NFT Gaming Platform Development Services from any best NFT Development Company, you can launch your own NFT Games on the BSC network.  We Bitdeal - Leading Metaverse NFT Marketplace Development Company which offers NFT games and Metaverse development on the various blockchain which includes Ethereum, Binance Smart Chain, Polygon, and more.

Why Launch an NFT Game on BSC Blockchain Network?

Safety and security in the BSC Ecosystem are unbeatable. The BSC blockchain is decentralized & it runs on open source code and the public can access it for audits.

BSC has a track record that is clean of hacks or incidents so that there are no attack vectors in the BSC chain.

Thus Binance Smart Chain becomes the best blockchain network to create your own NFT based Gaming Platform like the listed above games.

Where To Get The Best BSC-Based NFT Gaming Platform Development Services?

Some other popular Blockchain network we develop NFT Based Games includes,

We Bitdeal provides clones of popular NFT Metaverse clones to start your own NFT based Gaming. Listed here are the top-selling Metaverse NFT Gaming Marketplace Clone Scripts at Bitdeal.

Ready to launch your own NFT Metaverse on BSC blockchain?

Get A Free Quote From Bitdeal Now !!