How to create Dapp on Tezos Network ? 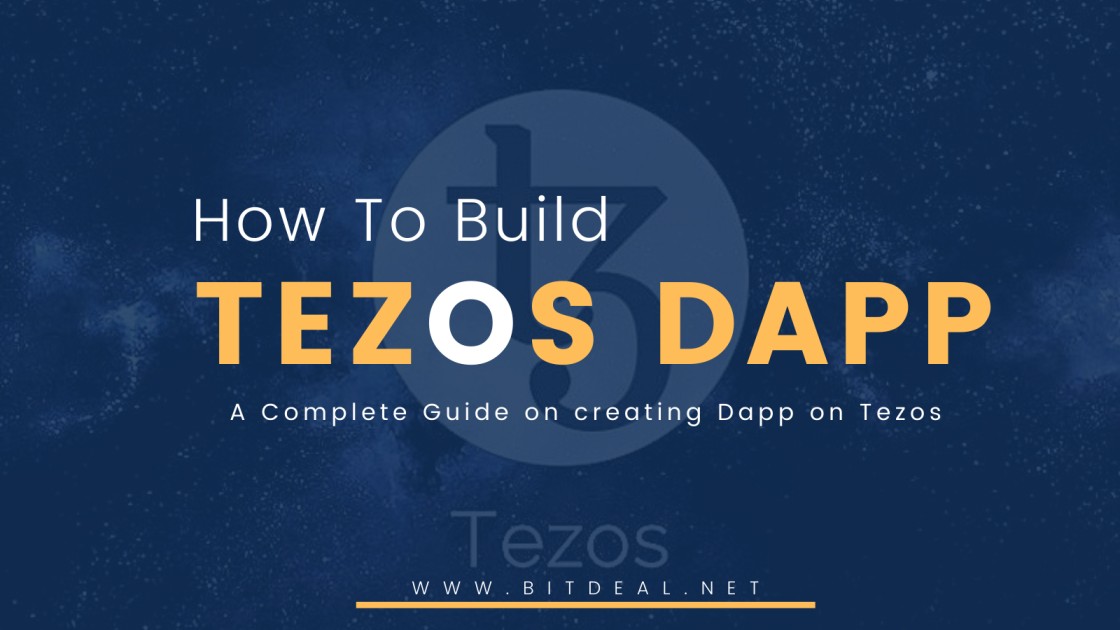 Blockchain, a massive technology will no longer be an unknown term for all of Us. Right? Dapp or decentralized applications are the utilization of blockchain technology which provides trust and seamless growth.

Here we are going to look at one of the most important blockchain networks, Tezos, the world's first Self-Governing Blockchain Network, and building dapps on the Tezos network in detail.

Tezos, a new self-governing blockchain network that was developed in early 2014 and came to live in 2018 is becoming a strong competitor for the most popular Blockchain Network, Ethereum. It was founded by Arthur Breitman & Kathleen Breitman in September 2018 in Switzerland.

Tezos (XTZ) is the native cryptocurrency of Tezos which is created through the process of Baking. In the list of top coins to invest in 2021, Tezos is also a major cryptocurrency which is the best choice of the crypto coin to be invested in 2021, to yield a high return on investment.

Dapp, the decentralized application is a computer-based application that runs only in a decentralized network. The potential of dapps is heavy and that can drift any kind of industry or business to the next level. Blockchain-based dapps create security, trust, transparency, and visibility among global users.

Dapps are immutable and decentralized, in which all the information is stored in a decentralized ledger that can not be modified or deleted. Most of the dapps are built on the Ethereum blockchain network. The features of dapps differ with the kind of business and one can involve many attractive features like reward programs and more to grab more user base.

These blockchain-based dapps can bring greater business growth with higher transparency and security.

Tezos, being a strong competitor to the famous Ethereum Blockchain Network has the following specialties.

It is a must-know factor to know about utilizing the specialties of Tezos to understand the working of Tezos blockchain network.

Through which stakeholders in the Tezos network can participate in the regulating protocol and can officially share their suggestions on the modification of protocols for upgrading the network.

Tezos blockchain network utilities delegated proof of stake consensus mechanism which aims for any stakeholders to join the processes and get rewarded for their contribution which increases the stability and scalability of the network.

Tezos allows for the construction of dapps and smart contracts which is built using Tezos Smart Contract language. The smart contract development also has a formal verification process to find the errors in the coding & to rectify them for better performance.

Thus working of Tezos is based on Proof of stake with a delegation which allows for every stakeholder’s participation in the network irrespective of the amount they hold.

Listed here are the major reasons to choose the Tezos blockchain network for the development of dapps and smart contracts.

8. Less Expensive as elimination of PoW

How to build dapp on Tezos?

Tezos is an open-source blockchain platform that has a complete collection of coders to code smart contracts and dapps on Tezos blockchain network.

Listed here is the general procedure to build a dapp on Tezos network.

So to build tezos dapp, one should be so familiar with the Tezos Smart Contract Language Michelson, which resembles the operation code of virtual machines. One can use a Javascript library called eztz.jz to manage RPC nodes directly which run essential commands easily.

TezBridge that uses an iframe & local storage to communicate with dapps across all the browsers. Here is the code screen of deployment of tezos dapp.

Listed here are some of the benefits of Tezos & Tezos Dapps.

These are the main advantages of building dapps on Tezos blockchain network.

Listed here are the key features of Dapp platform.

The process by which one who holds a stake in Tezos takes part in the governing protocol is known as on-chain governance. This provides holders a way to vote for the future performance in Tezos blockchain network. This is a system through which Tezos blockchain is upgraded by stakeholders who can vote for code modification and encoding of protocol. Thus, anyone in the network has the right to suggest changes in code which is validated and integrated by code developers.

The Tezos blockchain works based on delegated proof of stake consensus algorithm which allows the stakeholders to take part in the creation of blocks to obtain rewards. This DPoS means that even a small stakeholder can also participate in the block creation and get rewards, irrespective of the amount they hold.

Tezos is a first evolved self-governing blockchain network that believes hard forks are not only the way to upgrade the network, as like Ethereum and Bitcoin. Thus, the main feature of Tezos is its self-amending mechanism which is designed and developed as a decentralized cryptographic ledger for upgrading the system.

Develop your own Dapp on Tezos with all the key features & also advanced features to stand unique in the market.

Where to get the best Tezos Dapp Development Services?

We Bitdeal - Leading Tezos Dapp Development Company offers world-class decentralized application development on Tezos Blockchain Network. Our developers are skilled in a way that they can develop and deploy Dapp on Tezos platform for any kind of business or industry specific with any features & plugins inherited.

Some of the other Blockchain Platform we are expertise in building dapps and smart contracts are as follows :

Get featured-rich Tezos Dapp for your business from Bitdeal and enrich your customer base and ROI Now !

Get a Free Quote from Bitdeal Now !!